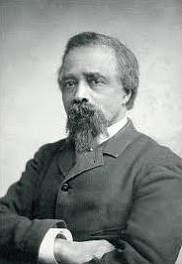 Edward Mitchell Bannister (1828 – 1901) was a black Canadian-American painter known for his exquisite landscapes.  Bannister was one of the few African American painters of the 19th century to attain considerable recognition. Bannister was inspired by the romantic realism of the Barbizon School; in particular William Morris Hunt who was one of Boston’s leading portrait and landscape painters at the time. Bannister’s personal commitment to social justice for African Americans was distinguished from his art practice where spiritual philosophy and universal beauty were of utmost importance.

In 1870 Bannister moved to Providence with his wife Christiana Cartreaus, a Narragansett Indian, and became one of the most prominent painters of the region. Bannister was able to open his own studio and paint full time. He was a founder and member of the Providence Art Club and was an original board member of the Rhode Island School of Design.

Bannister faced an uphill battle to become a professional artist. Despite the bigotry he experienced, Bannister's reputation grew. Although he never took formal art training, he was an accomplished painter who was deeply respected in the community and kept busy with numerous portrait commissions. Bannister's deep spiritual awareness was the force that drove him to persevere against all odds.

The historian Anne Louise Avery is currently writing a major biography and compiling the first Catalogue Raisonne of Bannister’s work.