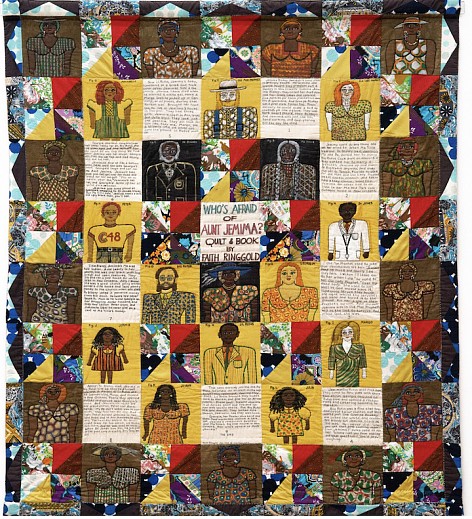 At Age 90, Artist Faith Ringgold Is Still Speaking Her Mind

For 15 years, Glenstone, a private contemporary art museum in Maryland, has showed solely the collection of its founders, Mitchell Rales and Emily Wei Rales. Now, the museum is ready to make an exception.

On April 8, Glenstone will open “Faith Ringgold,” a survey of more than 70 works by the artist known for her story quilts—patchwork tableaus like 1988’s “Tar Beach,” which chronicle scenes of Black history, hope and protest. The exhibit marks the only U.S. stop for a show that drew raves when it launched two years ago at London’s Serpentine Gallery and later traveled to Bildmuseet in Sweden.

Ms. Rales said she and her husband, who have begun collecting Ms. Ringgold’s works, were “blown away” by the scope of the Serpentine exhibit and felt compelled to bring it to the Washington area. “Nobody used to pay much attention to her work, and now she’s finally getting her due,” Ms. Rales said of the artist, who is 90 years old. “We couldn’t pass up our chance to get it.”

The Glenstone version is bigger than earlier iterations, with galleries devoted to Ms. Ringgold’s soft, sculptural works and installations—as well as a series of colorful, abstract paintings never before exhibited. For those unfamiliar with this once-overlooked artist, “Faith Ringgold” offers a poignant reminder of how difficult it was for a Black woman to join the New York art scene in the early 1960s.

Born in Harlem in 1930, Ms. Ringgold grew up in a rich cultural stew, with Duke Ellington as her neighbor and jazz musician Sonny Rollins as a childhood pal. The daughter of a car company executive and a fashion designer, she embraced art early on, using an easel and paints from her parents. Yet in 1948 when she applied to study art at City College, she was told only men could earn the degree and that her only workaround option was to major in art education. She did so, and spent years teaching art in New York public high schools while rearing two daughters and developing her own artistic practice.

Click here to read more at The Wall Street Journal