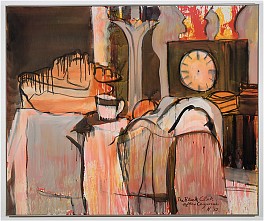 A homecoming for Abstract Expressionist Grace Hartigan at The Armory Show

Now this second-generation Abstract Expressionist is being singled out in the city where it all started for her, with a solo presentation at The Armory Show with ACA Galleries (which represented Hartigan during her lifetime, and then her estate after her death in 2008). It will include nine paintings and illustrates every decade of her career from the 1950s to the 2000s.

In socioeconomic terms, the Abstract Expressionist movement in New York can be divided into two eras: the first featuring obscurity and poverty, and the second, fortune and fame. But there was very little by way of a transitional bridge between those two periods, which made the arrival of a flood of cash and notoriety in the mid-1950s oddly destabilizing for the artists working in New York. As their colleague, the writer Harold Rosenberg, said, “They lost their minds.…It was the money. Just like schmucks in Hollywood. This hit them much too strong and much too organized.”