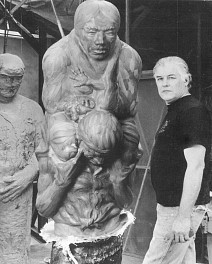 Luis Jimenez was born in El Paso, Texas, the son of Mexican immigrants. He studied architecture and art at the University of Texas in Austin and received a B.F.A. in 1964.

His father owned a neon sign shop, exposing Luis to spray painting and welding. He moved to New York in 1966, returned to New Mexico in the early 70’s and found success – and controversy – as a sculptor of outdoor objects informed by political and social satire.

Although Jimenez is primarily known as a sculptor, he was also an accomplished lithographer and draftsman, creating vibrant prints and colored-pencil drawings. For most of his mature life, Jimenez created populist art with reinterpretations of images associated with the American West and Mexican American culture. His public commissions can be seen across America. He enjoyed success and professional recognition, and at times, heated controversy.

His art elici/ts strong feelings, debate and controversy and is unflinchingly imbedded in the passionate issues of our modern world. A unique fusion of “Chicano” and Anglo-American worlds, Jimenez is an unorthodox Pop artist with humanistic concerns. He achieves his view by utilizing undiluted vibrant colors (a legacy from his work in his father’s neon sign company and the Mexican muralist influence) and fiberglass (the technology of the North).

Luis Jimenez: Man on Fire, a retrospective exhibition with 331 works, opened at The Albuquerque Museum in New Mexico in 1995 and traveled to The National Museum of American Art in Washington, D.C. In 1997, a traveling retrospective exhibition of his work, Luis Jimenez: Working Class Heroes: Images from a Popular Culture, opened at The Dallas Museum of Art, the first venue of a three-year national tour.

He was the recipient of many awards and grants including the 1998 Texas Artist of the Year Award and the 1998 “Distinguished Alumni” from the University of Texas in Austin; 1993 Governor’s Award, New Mexico; 1990 La Napoule Art Foundation Residency Fellowship; 1989 Skowhegan Sculpture Award; 1979 Fellowship Award, National Endowment for the Arts; 1977 Hassam Fund Purchase Award and four NEA Art in Public Places commissions, among others.

Jimenez completed a sculpture of firefighters for the city of Cleveland in 1995 and in 2005 a forty-foot Mustang sculpture was installed at the Denver Airport.