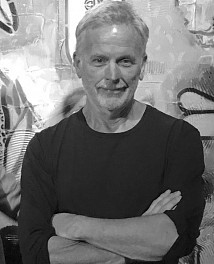 For more than forty years, Michael Netter has been assiduously creating video art, paintings, assemblages and fashion apparel. A self-taught artist, he became a protégé of Andy Warhol, fully immersed in the dynamic art world of New York City in the early 1970s.

At age 22, as a fledgling painter, Netter was drawn to a major tech innovation, the Sony Portapak, the world’s first portable video system. From a family of Hollywood moviemakers, Netter was no stranger to the power of storytelling and the moving image.

He spent his last dime buying the Portapak and began creating pioneering video art. At the same time, Netter was introduced to Andy Warhol by his good friend and fellow Georgetown alumnus and Interview Magazine editor, Bob Colacello.

From 1970 – 1973 Michael worked with Warhol shooting 200 videos of events and celebrities of the time. Titled the Factory Diaries, they’re featured at The Warhol Museum in Pittsburgh and at other museums around the world. Subjects range from Warhol superstars Candy Darling, Joe Dallesandro and Brigid Polk to fashion icons Halston and Twiggy, musicians like Lou Reed and David Bowie (as he met Andy for the first time), artists like Larry Rivers and actors including Dennis Hopper and Cybill Shepherd… to name a very few.

Netter continued to paint during those formative years in Warhol’s Factory. His early work, of which Andy was a big fan, consisted of a series of colorful, grid paintings of brick walls. Warhol encouraged Netter to paint and gave him pointers that have informed his work to this day. His portrait of Andy is also in the collection at The Warhol.

In 1973, Netter left the world of Warhol and… as a painter… went underground. Over the next four decades, he built a successful business consulting practice. Capitalizing on his artistic background, Netter developed creative branding and marketing strategies, product innovations and logo designs for over seventy-five companies across myriad industries including Coca-Cola, Verizon, American Express, United Artists, Merrill Lynch, Kraft Foods and JP Morgan Chase.

For Netter, painting has always been about the magic of creating, self-expression and self-fulfillment. He loves the art of painting: The joy I feel while painting fuels my work. I love making something from nothing — I can BOTH invent and solve the problem. I can materialize my innermost thoughts and feelings, transcend my everyday self and create my own, unique universe. And I’ve enjoyed becoming a master of my craft… a result of devotion.

By remaining private and “not-for- sale” with his art, relatively immune from art-world influences, Netter’s work has stayed authentic — it reflects his personal interests, original point-of- view and unique vocabulary.

In Netter’s words, “Looking back across my body of work, I’d say I’ve been inspired most by the riddles posed by out of-context symbols, words, marks, everyday objects, commercial and vernacular messages, and religious talismans (milagros). Nothing seen as special. Appreciating that “meaning” is subjective (and unstable), I’m not concerned with narratives. I want my work to register as random incident, images haphazardly on top of each other, as if found on street walls. I use stencils because they are impersonal and unmannered, the pedestrian medium of a sign painter rather than a fine artist.”