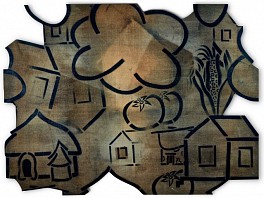 THE DAILY PIC (#1588): In the early 1970s, a young man named Michael Netter started working as Andy Warhol’s in-house videographer. He helped extend the artist’s record-everything ethos from Polaroids and audiocassettes to a pile of videotapes – in wildly low-res, as per my image – which at some point got dubbed the Factory Diaries. (Even though, strictly speaking, Warhol’s Factory stopped existing in 1968, when he moved it to Union Square and renamed it The Office – a rechristening that most people have ignored). Judging from the sample of tapes on view now in a side-room of Netter’s solo show at ACA Galleries in New York, he was just the man for the job.