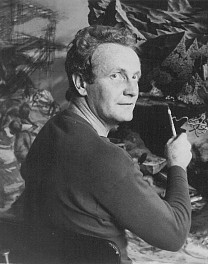 Peter Blume’s paintings are narratives of metamorphosis: Renaissance artistic traditions transmuted into Modernism; classic European sensibilities fuse with American energy and expansiveness; acts of repairing the world are exposed through the visual language of dreams. In the 30s and 40s, when the world was still healing from the upheavals of World War I, witnessing the brutal rise of Fascism, and was bracing itself for the inevitable outbreak of World War II, Blume’s emotionally charged canvases were among the most significant works of the time.

Peter Blume and his family immigrated to the United States in 1911 and settled in Brooklyn, New York. Blume's artistic talent was recognized early. By age 15, Blume was enrolled in art classes at the Educational Alliance in Manhattan. While still a teenager, Blume studied at the Art Students League and The Beaux Arts Institute of Design. By 1926, Blume had his own studio.

Associated variously with the Precisionists and Surrealists, Peter Blume excavated the full depth of art history, taking elements of folk art, Classical antiquity, the Renaissance and Modernism, and worked them through his interest in metaphysical experience, particularly automatism. In the 40s, Peter Blume, along with fellow artists Arshile Gorky, Yves Tanguy, Alexander Calder and Kay Sage, became a practitioner of “automatic writing.” Blume's experience with automatic writing is evident in his studies and drawings, where lines flow as if from spontaneous, unconscious movement of the artist’s hand. Throughout his career, Blume made numerous drawings and studies in preparation for the paintings. These preliminary works exhibit Peter Blume’s understanding of architecture and landscape, the emotional properties of color, well-defined narrative within a surreal context, and the development of a personal visual vocabulary. We see Blume introduce what would become recurring symbols of metamorphosis and rebuilding: ruined statuary, building fragments, fallen rocks, and figures engaged in the world’s repair.

Peter Blume won critical acclaim in 1934 as the winner of the Carnegie International Exhibition’s First Prize for his painting South of Scranton, completed three years earlier. The painting is a Surrealist documentation of industrial factories, steel mills, coal mines, railroads, ships and sailors Peter Blume saw during a road trip in 1930 across Pennsylvania and into Charleston, South Carolina. South of Scranton is now in the collection of The Metropolitan Museum of Art.

Peter Blume’s extended stay in Italy on a Guggenheim Fellowship in the 30s brought him into direct contact with the glory of Italy’s Classical past, its elegant Humanism of the Renaissance, and the Fascist regime imposed by Mussolini. Blume's painting, The Eternal City, completed between 1934 and 1937, uses all of these elements to create a nightmare scenario of civilization destroyed by a madman. The Eternal City is in the collection of the Museum of Modern Art, New York.

Peter Blume’s work maintains its importance in art history, and is represented in major collections including the Art Institute of Chicago, the Princeton University Art Museum, the Smithsonian American Art Museum, the Museum of Modern Art, The Metropolitan Museum of Art, and the Pennsylvania Academy of Fine Arts, among others.