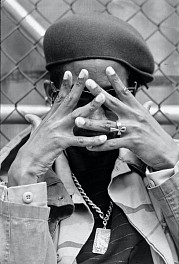 P.H.A.S.E. 2 (1955- 2019) is known as a “hip-hop” pioneer for his artwork, fashion, music, dance and party flyers.  His oeuvre set the groundwork for a growing inner-city culture and became a worldwide phenomenon. A first-generation ‘writer’ with roots in the NYC subway art movement, he was an innovator of what he called “wild lettering.” In 1972 he pioneered the “softie” (bubble) letter used in the earliest subway “pieces” and introduced arrows, curls, twists and other connections that became universal visual elements in the worldwide movement.

From rap’s beginnings, P.H.A.S.E. 2 was present, from the park jams to the clubs. He rhymed and chanted with his original crooning style rap flow. Through his dance crew, Electrified Movement, he introduced the B-boy world to battle (up) rocking and other styles. He assembled one of the most important B-boy crews (The New York City Breakers).

P.H.A.S.E. 2 formed a decade partnership with IGTimes, the premiere, international street art publication where he edited, art directed and wrote critically about the culture. In 1996 his book, Style: Writing from the UnderGround was published.

In 1994 he received the “Source Award” for his significant contribution to the culture.

Always an innovator and a trend setter, he set the bar for contemporary urban art. A style master whose works first focused on language, the letter, communication and then beyond to “unspoken words” and to themes of self-discovery and inner strength. P.H.A.S.E. 2 strode to be an underground artist, building his own worldwide network to advance his artistic narrative.