Known for its irreverence, anonymity, and unrelenting impishness, the Bruce High Quality Foundation has resurfaced with its first show in three years, a solo outing titled “The End of Western Art” that is on view at ACA Galleries in New York through June 21.

The last time we heard from the collective of Bruces, as they’re called, was back in 2017, when their free, unaccredited art school, the Bruce High Quality Foundation University, was closing after eight years of outside-the-box arts education. Fittingly, this new show could be seen as an art history class of a kind: each BHQF work is presented alongside a piece by an artist to which it alludes. Names on the guest list include Pablo Picasso, Chaim Soutine, Albert Pinkham Ryder, Marcel Duchamp, and Joseph Cornell. One pairing is a chalkboard covered in frenetic scribbles with a Joseph Beuys readymade—an eraser—perched next to it. School is very much in session.

After a three-year hiatus from exhibiting work, the Bruce High Quality Foundation has a show at ACA Galleries in New York. The Brooklyn-based artist group, which values its anonymity, is known for its often-subversive installations, performances, and film works, as well as its eponymous, but now defunct, university—a free school that offered art students an alternative to formal education. “The End of Western Art” features works by its members, known as the Bruces, alongside pieces by artists to whom the works allude, such as Pablo Picasso and Marcel Duchamp.

A collector of the group’s work, Nemo Librizzi, curated the show in collaboration with ACA director Mikaela Sardo Lamarche. “Unlike other artists who are inspired by the artists who came before them and try to conceal it, [the Bruces] lay it all bare and show you the puppet strings,” Librizzi told Artnews. The exhibition will be on view until June 21.

Published in 2019 on the occasion of the exhibition The Bruce High Quality Foundation: The End of Western Art at ACA Galleries, New York

Is This Really, Truly the End of Western Art?

After 15 high-concept years showing art at some of America’s most important museums and, for a while, operating a free art school, the collective known as the Bruce High Quality Foundation continues to approach their work with the irreverence of a college student stumbling into class late with a blinding hangover. The group’s members have insisted on anonymity, though by now their identities are well-known in the art world. So, too, is BHQ’s founding legend: It was named after a fictional artist, Bruce High Quality, who supposedly perished on 9/11.

The group’s latest exhibition, at ACA Galleries, is titled “The End of Western Art,” and, you know, sure, why not. It stays true to the group’s wry and self-consciously well-educated sensibility by coupling their work with historical pieces. Crushed beer cans, stubbed out cigarettes, and dry ramen noodles, among other tokens of eternal adolescence, are contrasted with the work of big-name 20th-century artists and artifacts from the ancient world. (Bruce fans might remember when, in 2013, they recreated the Equestrian Statue of Marcus Aurelius — the ancient Roman bronze statue dating back to 175 CE — with high-density foam, plaster, car speakers, and televisions to replace the heads of the emperor and his horse.) 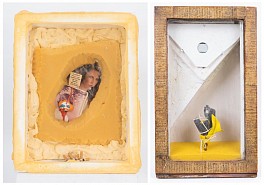 Editors’ Picks: 18 Things Not to Miss in New York’s Art World This Week

For the collective’s first US exhibition in three years, curator Nemo Librizzi will pair works by the Bruce High Quality Foundation with the very artists that the collective references throughout their oeuvre. That includes examples of ancient art, Renaissance artists such as Giorgio Vasari, and 20th-century masters such as Pablo Picasso, Chaim Soutine, Albert Pinkham Ryder, Marcel Duchamp, and Joseph Cornell, among others.