“An artist creates, and what comes out, comes out. I have no control over what other people might think. Creation, whether it’s songs or paintings try to tell a story and try to engage the viewer or the listener,” explains John Mellencamp when asked about the relationship between the paintings in his latest exhibition at ACA Galleries in New York City, entitled “Life, Death, Love, Freedom” and his 2008 album by the same name. Rolling Stone called the album one his best. When asked about this Mellencamp replied “I pay no attention to what Rolling Stone says about my records. On one hand, they say this; on one hand, they say that. I never could figure out what they were saying that mattered, and that’s just about anyone.” Ah, John, so nice to have you here in New York! 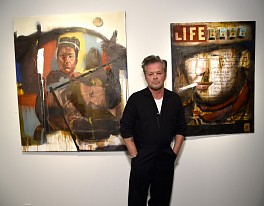 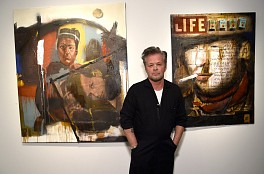 On Wednesday (April 25), John Mellencamp welcomed guests to his second art gallery opening in New York in three years to display a striking new mixed-media style to his paintings -- the counterpoint to his career as one of the most successful rock songwriters of his era.

‘Painting Is a Way for Me to Be by Myself’: John Mellencamp on Life, Rock, and His New Show at ACA Galleries

The musician and artist John Mellencamp stumbled into his first record deal while traveling to New York City from his home state of Indiana in search of an art school to attend. It was the mid-1970s, and the future star, who at various points in his long career has also been known as Johnny Cougar, John Cougar, and John Cougar Mellencamp, had just graduated from Vincennes University, a small two-year college in Indiana. “I figured while I was in New York, I might as well see if I can get anything going on [the music] end,” Mellencamp, who spent his teenage years playing in bar bands, recently told me over the phone. “And, as it turns out, at 20 years old, 21 years old, New York Art Students League wanted me to pay them money, and the record companies wanted to give me money.” 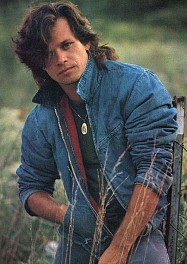 The singer-songwriter learned to paint by watching his mother do so every day. After a move to New York to study art, he ended up snagging a record deal.