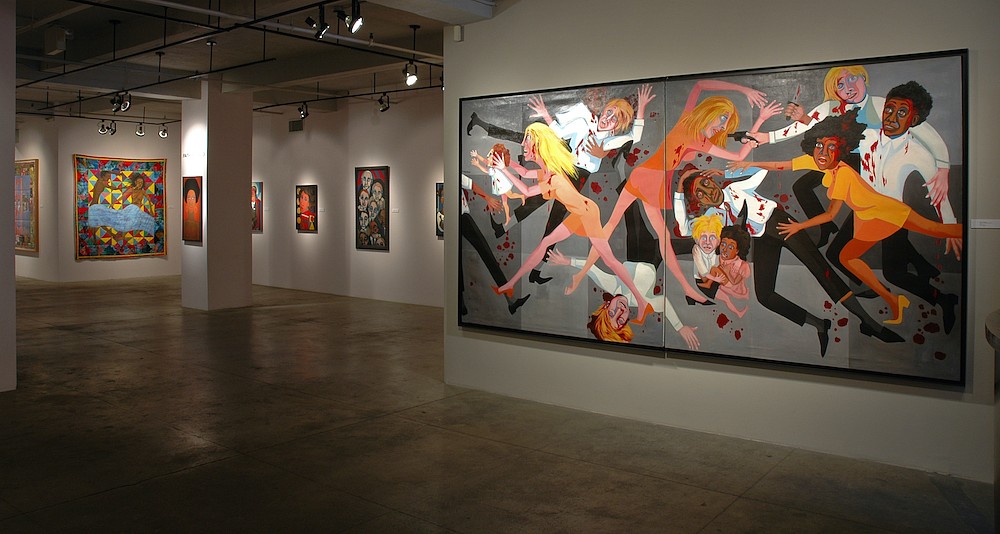 ACA Galleries is pleased to present Faith Ringgold’s America: Red, White and Black, a survey exhibition featuring work from the 1960s to the present.  On view will be oil paintings, tankas and story quilts.

For fifty years, Faith Ringgold’s art has commented on racism and gender inequality. Though best known as the progenitor of the African American story quilt revival, it is her pointed political paintings of the 1960s – many of which disappeared from view – that are the focus of this exhibition.

The traveling exhibition, American People, Black Light: Faith Ringgold’s Paintings of the 1960s, organized by the Neuberger Museum of Art in Purchase, NY, (September 11-December 19, 2010) was the first comprehensive survey of her early paintings. The exhibition showcased Ringgold’s two earliest series, American People (1962-1967) and Black Light (1967-1969), which have not been seen together since they were first exhibited in the late 1960s and early 1970s.

In both series, the artist explores issues of racial conflict, which are inextricable from her experience as an American. In the painting Flag for the Moon: Die Nigger (1969), Ringgold inscribes the American flag with the words “die” behind the stars, and “nigger” within the stripes. She once explained to an interviewer, “It would be impossible for me to picture the American flag just as a flag, as if that is the whole story. I need to communicate my relationship with this flag based on my experience as a black woman in America.”

Resulting text-based works prompted political posters such as People’s Flag Show (1970), produced for an exhibition co-organized by Ringgold. That exhibition featured over 200 works made from, or about, the American flag, and ultimately led to Ringgold’s arrest for violating the Flag Protection Act of 1968. United States of Attica (1971), her most widely distributed poster of the 1970s, was created in response to the Attica prison riot in western NY. This poster, presenting a United States map across which appear written accounts of acts of violence, invites collaboration as Ringgold captions, “This map of American violence is incomplete. Please write in whatever you find lacking."

In the 1960s Ringgold found her political voice through her paintings, posters, and murals.  These works were also a vehicle for her discovery of artistic methods to express that voice: methods crucial for understanding everything the artist has since created.

There exists an incongruity between the fiery social climate emerging from Civil Rights Movement and the Vietnam War, and the Pop and Minimalist movements of the same era. Ringgold’s work offers clear insight, into what it meant to be an African American woman making her way as an artist during this critical moment in United States history.