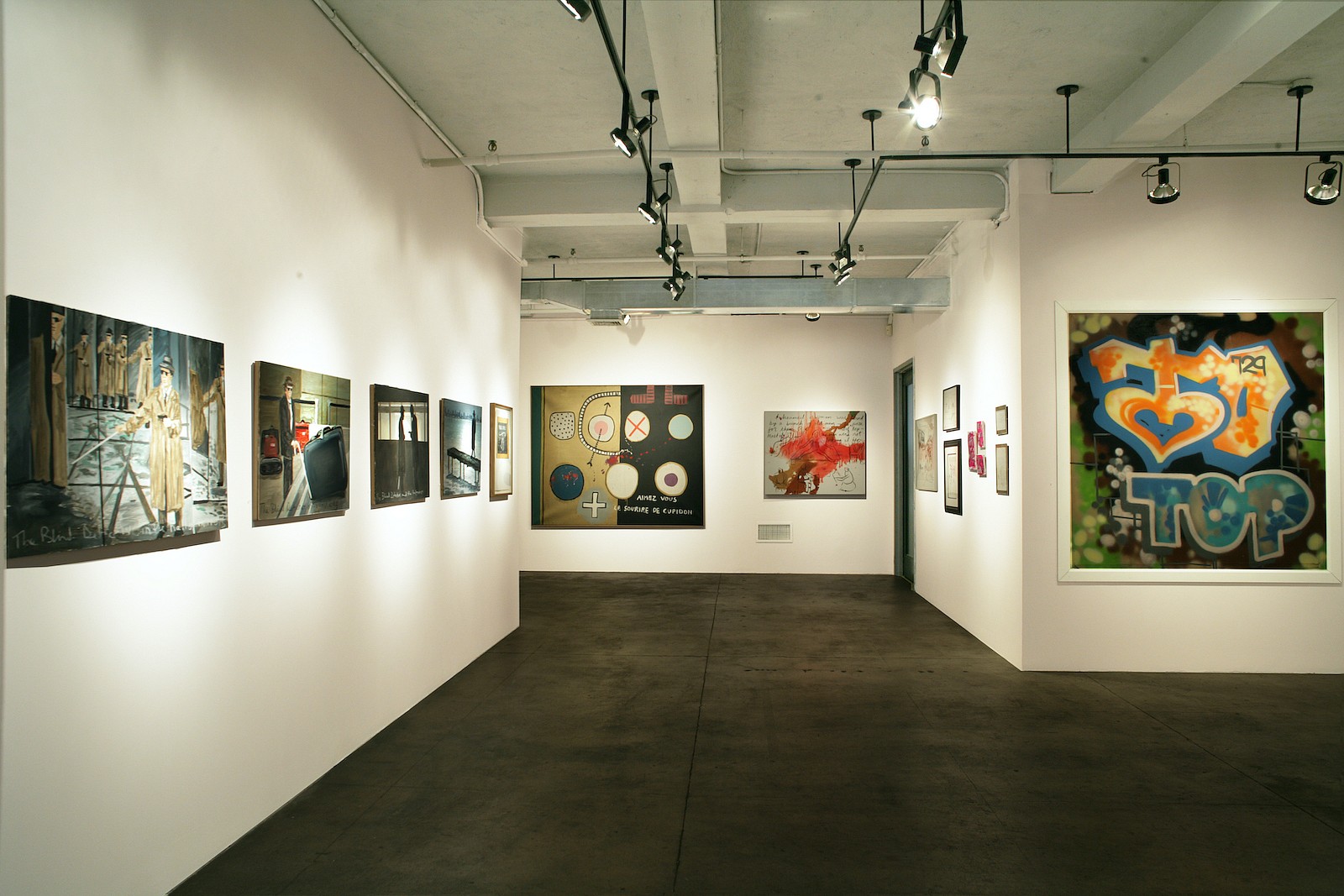 Isn’t a picture enough? This is art we’re talking about here, visual art, the kind of stuff that hangs in art galleries and museums. Why muck up the pictures with words and scribblings? For many artists, the answer to that first question is “No, sometimes a picture is not enough.” For them, written text accompanying images on a canvas or other surface are as much a part of the work as form, shape, line and color. In fact, for certain artists, text is not only a conveyor of message, it is form, shape, line and color.

ACA Galleries’ exhibition TEXTURES: The Written Word in Contemporary Art will showcase the work of artists who have incorporated written text as part of their aesthetic, their politics, and even their state of mind.

Written text has a long history in art. Whether it was the devotional and laudatory text spread across the walls of ancient Egyptian tombs, the sometimes bawdy text in “oxturn” inscribed into Classical Greek pottery, or Jan Van Eyck ensuring that posterity knew he was the attending portraitist by inscribing “Johannes de Eyck fuit hic” (Jan van Eyck was here) above a mirror’s reflected image of himself in the 1434 painting of the Arnolfini wedding, artists have used text to lure us more deeply into their created moment. In our own time, written text, in visual art or simply on a page of paper, must also confront the challenge posed by the ubiquitous fonts of the computer. To paraphrase the poet Dylan Thomas, it is no longer “The hand that signed the paper” but the hand that taps a keyboard. Thus, in visual terms at any rate, the hand that still physically creates or applies text retains a significant human power.

In the courageous or adventurous minds and masterful hands of artists such as Romare Bearden, Robert Cole- scott, Grace Hartigan, Elaine de Kooning, Aminah Robinson, Faith Ringgold and Flo Oy Wong, hand-applied text expresses that human power. In their work, written text is not only part of the formalities of composition, line, color and so on, but it is an organic statement of presence. As African Americans, Asians and/or women in the arts, communities which had often been marginalized by the American art world’s cultural gatekeepers, their use of text, while it may indeed convey a social, political, cultural or aesthetic message, can also be likened to van Eyck’s personal “fuit hic.” Their written text, whether in paint, applied paper or sewn fabric, further insists on their presence.

This is especially true in the work of Elaine Reichek. Using the historically associative thread and fabric of “women’s work,” Reichek brings women’s traditions to bear on the larger concepts of image-making and storytelling. Taking myths and tales from history or from literature, such as works by Shakespeare, Reichek’s embroidered text removes these stories from an experience of mind and renders them instead as intimate, personal, and even tactile experiences.

In the precocious mind of Jean-Michel Basquiat, text was as totemic as the glyphs of the ancient world and as aggressive as the graffiti saturated street, two realms with which he identified in equal measure. The urban street has historically been a place of text-based visual communication. Handbills, advertising posters, community announcements, news bulletins and revolutionary slo- ganeering have been pasted on and scrawled across city walls since ancient times.

Graffiti, criminalized by modern authorities, but with roots traceable at least as far back as ancient Rome, is an expression of that tradition, whose energetic presence continues today on streets around the world. New York graffiti artist Dondi was among the city’s outlaw pioneers of the 1970s graffiti revival, spreading his colorful, spray painted presence across walls and subway trains, angering officialdom but delighting more adventurous mem- bers of the public. His later work, studio based and gallery accepted, nevertheless remained faithful to contem- porary graffiti’s anarchic purpose.

Text as avant garde or outlaw statement has also found a place in more rarefied intellectual circles as well. Beat Generation writers, already breaking standard- ized, rigid boundaries of accepted “taste,” put their savvy language to visual use, as Allan Ginsberg does in “Hum Bom!” where the stanzas of his incanta- tion-like poem descend like dark nuclear fallout onto a drawing of a diseased and mutant organism. For Gregory Corso, the exquisite control he exercised over the craft of his street-inflected poetry was abandoned in a wild experience of visual interplay in his annotated drawing of a Medieval battlefield. And perhaps the most reprobate of the Beats, William S. Burroughs, together with Brion Gysin, found an utter purity in visually unadorned handwritten words and the hypnotic states they can conjure. Hypnotic qualities are also embedded in the fantasies of Jonathan Borofsky, who shares with us his sweet and childlike dream of the artist Malcolm Morley and the cultural commentary of Flo Oy Wong.

In ACA Galleries’ TEXTURES: The Written Word in Contemporary Art, curator Mikaela Sardo Lamarche has produced an exhibition which assures us that the written word as visual message, symbol, totem, line or shape remains—and must remain—an important human touchstone. Letters formed by the hand as they have been for millennia (those ubiquitous computer fonts notwithstanding) are part of our shared consciousness. The works on view in this exhibition tap into that consciousness. We are forced to address a larger issue than simply the question we started with: “Isn’t a picture enough?” We have to wonder what becomes of the human experience without words shaped by our hands.