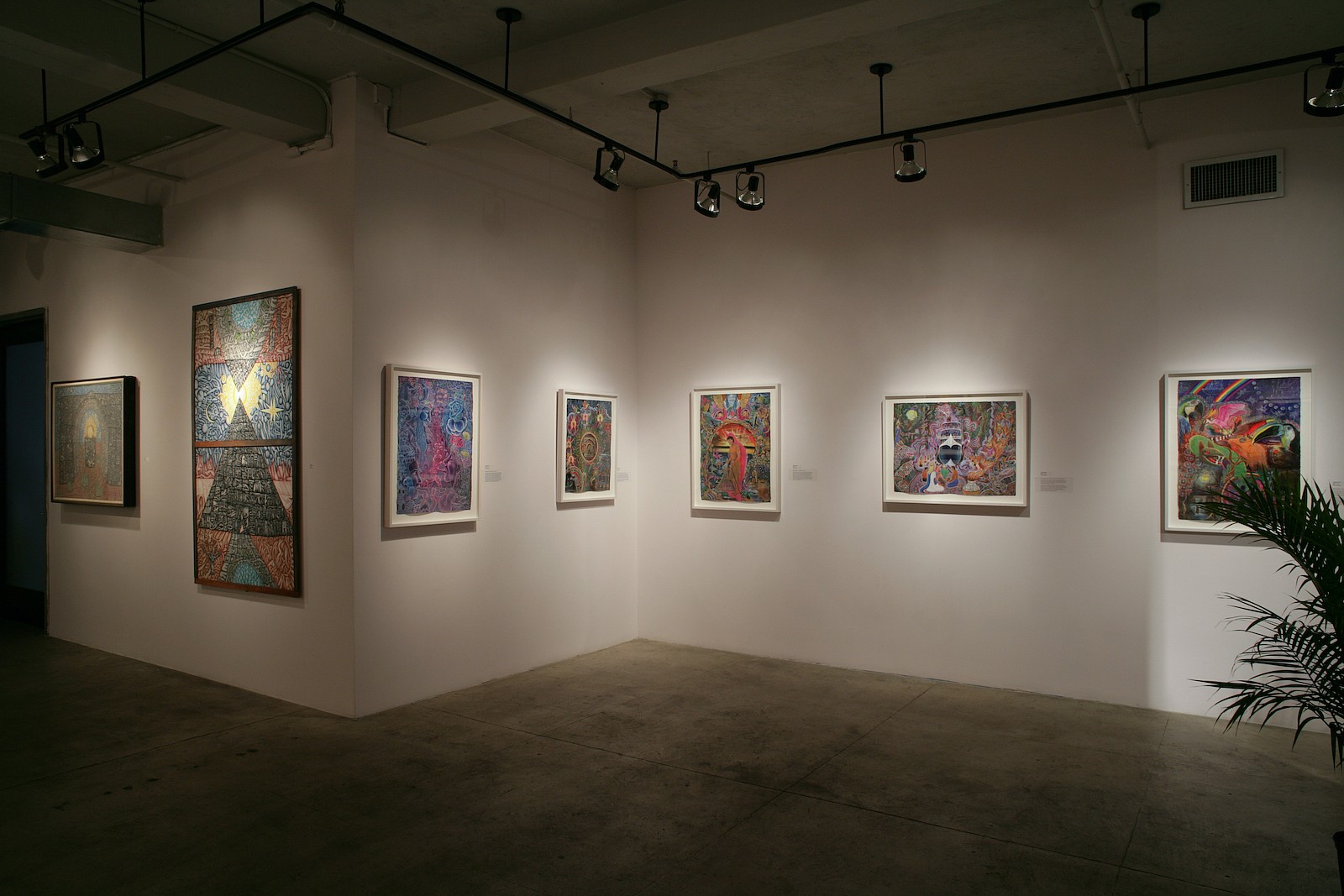 ACA Galleries is pleased to announce Shamanic Illuminations: The Art of Pablo Amaringo, Alex Grey and Mieshiel, a group exhibition featuring the artwork of three visionary artists.
Pablo Amaringo (1938–2009) was born in Puerto Libertad, a settlement on the banks of the Ucayali River in Peru.  He was 10 years old when he first took ayahuasca--a visionary brew used in shamanism. A severe heart illness —and the magical cure via ayahuasca—led Amaringo toward the life of a shaman.  He eventually became a powerful curandero—learning the icaros, or healing songs, that the ayahuasca brew taught him.  In 1985 Ayahuasca Visions: The Religious Iconography of a Peruvian Shaman by Dennis McKenna and Luis Eduardo Luna was published.

In 1988, Amaringo founded the Usko Ayar School of Painting in Pucallpa, a school dedicated to teaching art along with the rich botanical diversity of the jungle.  Amaringo was honored with the Global 500 award from the UN Environmental Program in 1992.

Pablo Amaringo’s latest volume, The Ayahuasca Visions of Pablo Amaringo (published posthumously) includes 47 color plates of never-before-published paintings with detailed narratives highlighting the rich Amazonian mythology underlying each work.  It also includes reflections from many well-known artists and visionaries such as Robert Venosa, Graham Hancock, Jan Kounen and Dennis McKenna, on Amaringo’s life, his contributions to his community and his role in sharing the visions and power of ayahuasca with the world.

Two monographs, Sacred Mirrors, The Visionary Art of Alex Grey and Transfigurations  chronicle Grey's painted theophanies and ritual performance art. In the video, ARTmind, the artist explores the healing potential of sacred art.  The artist's philosophical reflections on creativity as spiritual path, are included in The Visionary Artist, CD, and the books, The Mission of Art and  Art Psalms.

Grey's widely appreciated works of transformative art were exhibited for five years in New York City at the Chapel of Sacred Mirrors, CoSM, which he co-founded with his wife, the artist Allyson Grey. CoSM: The Movie, released in 2006, (Docurama), documents Grey’s tour of the Chapel of Sacred Mirrors, CoSM, now a sanctuary of visionary art, located in Wappinger, New York.

Mieshiel (1964 - )  was born in New York City.  He attended Friends Seminary and received his BFA in 1986 from California Institute of the Arts. Upon graduation Mieshiel moved into a 19th century Masonic Temple in downtown Los Angeles where he co-founded TAP (Temple Art Performance), a hub for avante-garde performance art, music and visual art. He later moved to New Mexico and spent the next 24 years in near seclusion, living off-the-grid on solar power and rain catchment.  In this high desert sanctuary timelessness and utter quiet allowed him to experience an endless barrage of mystical experiences where his art connection with Pablo Amaringo was revealed.

In 1982 Mieshiel won a competition and created a street mural at Irving Place in New York City. He designed the album jacket interior for the Séraphine soundtrack, produced by Warner Brothers. His work has been exhibited nationally and is included in the permanent collections of The Harwood Museum of Art in Taos, New Mexico and Amon Carter III, among other private collections.