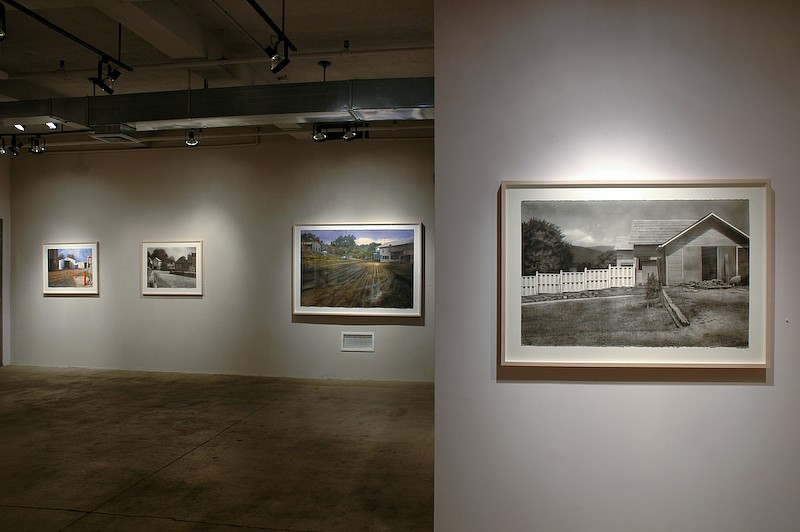 ACA Galleries is pleased to announce the exhibition Kempton: Works on Paper 2009 – 2011. This body of work is the result of over two years depicting a small town in rural Pennsylvania, and documents transient moments in this common place.

Matthew Daub is a breathtaking artist. His work is subtle, understated, “poetic” – he’s a visionary of the near-at-hand and seemingly domestic – the world for smalltown America, rural landscapes and forlorn industrial buildings upon which light and the absence of light confer an austere dignity.  Walt Whitman – who saw the universe in a “blade of grass” – would have admired Daub’s ghost-towns from which human figures seem to have vanished as in the wake of a mysterious cataclysm.  Like his distinguished American predecessors Winslow Homer, George Bellows, John Marin, Edward Hopper, and – (if we subtract the shimmering mysticism) – Charles Burchfield, each of whom painted American scenes in profoundly different ways, Matthew Daub makes of the regional something universal and archetypal; his flawlessly executed watercolors and paintings are not representations of scenes we have all seen, but transformations of the familiar into something rich and strange. -Joyce Carol Oates

Daub’s drawings and watercolors have been widely exhibited for over three decades. He has had more than twenty one-person exhibitions at galleries and museums throughout the United States. His works have been featured in numerous invitational exhibitions at institutions including The Metropolitan Museum of Art, The American Academy of Arts and Letters, The Bronx Museum and the 185th Invitational Exhibition of American Art at the National Academy of Design in New York in 2010.

He has received fellowships from the Pollock-Krasner Foundation and the Illinois Arts Council.

He has been a Professor of Fine Art at Kutztown University of Pennsylvania since 1987. This is his first exhibition at ACA Galleries.