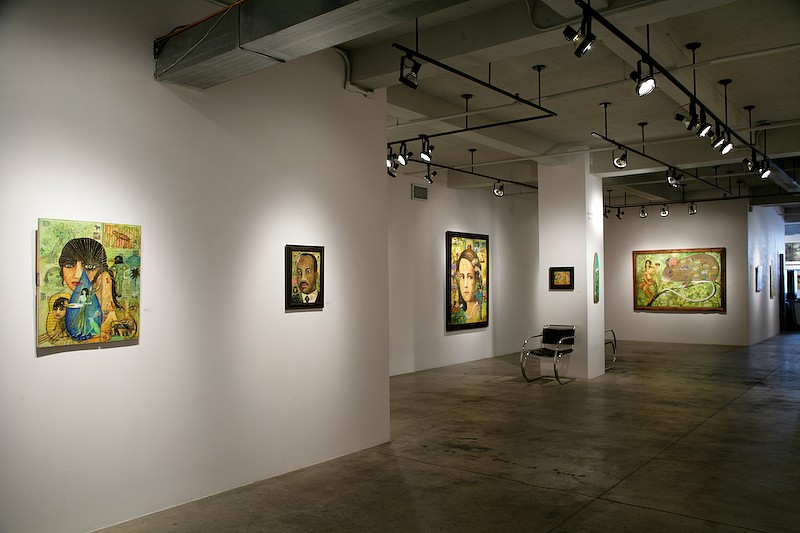 ACA Galleries is pleased to present Some kind of wilderness, an exhibition of new paintings and drawings by Irene Hardwicke Olivieri. Devils and their trumpets, female adventurers armed with quivers of paintbrushes, and bandoliers of paint roam the walls between large, personal portraits. Themes of inner and outer wilderness—the true province of the artist—are projected outward for us to inhabit at her side. The show's title can be heard as a howl of disbelief (the artist recently lost her father), or an exclamation of gratitude. It conjures up heroic odysseys with their nude female heroines lifting paintbrushes and paint against harsh, ambiguous environments, reclaiming their lives.  Later, we see these same girls as strong, active and prepared "tree-top troopers"; explorers fully equipped with sable-tipped brushes, palettes, water jars, shiny tubes of pigment acting as talismans to create hope.  There's a sense of being "fully prepared," as in Better is the Ready, able to capture anything with her art, which may also serve in a child-like universe, as the best   protection against misfortune.

Throughout the show, Hardwicke Olivieri explores the word wilderness turning it over emotionally and visually. Paradisiacal events and long lines of writing, rattle or glide over many of the paintings, adding an archaic glaze while pouring out messages and secrets of the natural world.

Always in Irene’s art can be found an ecstatic, clear-hearted vision, a world in which animals are understood and where humans provide sanctuary.  In Call from paradise, the arboreal, half man/half tree figure allows countless creatures a place among his branches. Across his chest he wears the words Let us hold dear the lives of all species, a  medieval banner.  He is virile, graceful; his grooved ponderosa bark and trunk add rootedness and stability.  All feel safe here even a shy lynx-girl nestles in his protecting arm. The hand-built frame of incense-cedar, once the home of an ant colony, amplify the sense of sanctuary.

Irene Hardwicke Oliveri was born and raised on the southern tip of Texas. As a young woman she traveled in Brazil and Mexico, studying and painting native plants and animals.  She received a B.F.A. from the University of Texas, and an M.A. from NYU. Highly knowledgeable about plants, she has worked as a gardener and lecturer at the Cloisters and at the New York Botanical Gardens where she created drawings of neo-tropical palms. She and her husband currently live off the grid in the high desert of Oregon sharing their lives with mule deer, badgers and mountain lions.