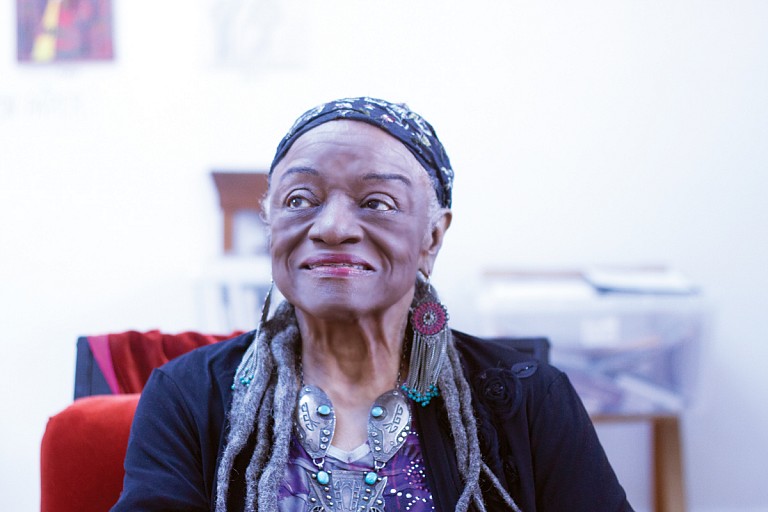 The Storyteller: At 85, Her Star Still Rising, Faith Ringgold Looks Back on Her Life in Art, Activism, and Education

In 1963, Faith Ringgold was 32, the mother of two daughters, and on the hunt for a gallery to show her work. To say that it was difficult for black artists to find gallery representation at that time would be a gross understatement. Nevertheless, as Ringgold tells it in her memoirs, We Flew over the Bridge (1995), she was unrelenting in her search, and one day she had a meeting with Ruth White, who ran a gallery in Manhattan on 57th Street.

The artist’s second husband, Burdette Ringgold (everyone calls him Birdie), went along too, carrying her paintings, as he always did. “We never showed [galleries] books or slides,” Ringgold told me one morning in her studio at her home in Englewood, New Jersey. “We used to bring in the actual art because I didn’t want to hear anything about, ‘Yeah, but I can’t see it. I don’t know what you do.’ ”

Ringgold showed White her paintings—still lifes and landscapes in what she called “French” colors, which were very much in line with the gallery’s focus. The dealer studied the work, the artist told me, then said to her, “You”—pause—“can’t”—pause—“do that.”

“What is she talking about? I was taught that!” Ringgold remembered thinking. “She says I can’t do that. I can do anything I want! Hmmm. Hmmm. That’s interesting!”

Driving back to Harlem, she and Birdie talked about what had happened. “I said to him,” Ringgold continued, “ ‘You know something? I think what she’s saying is—it’s the 1960s, all hell is breaking loose all over, and you’re painting flowers and leaves. You can’t do that. Your job is to tell your story. Your story has to come out of your life, your environment, who you are, where you come from.’ ”

The encounter was transformative. Over the next few years, Ringgold would produce some of the most searing depictions ever made of race relations in America, beginning with her “American People” series of paintings, which presents interracial tensions with unflinching clarity. In The American People Series #2: Between Friends (1963), a white woman and a black woman eye each other, close up but from a vast psychological distance. In The American People Series #1: Members Only (1963), six menacing, white faces, cloaked in shadows, stare down the viewer.