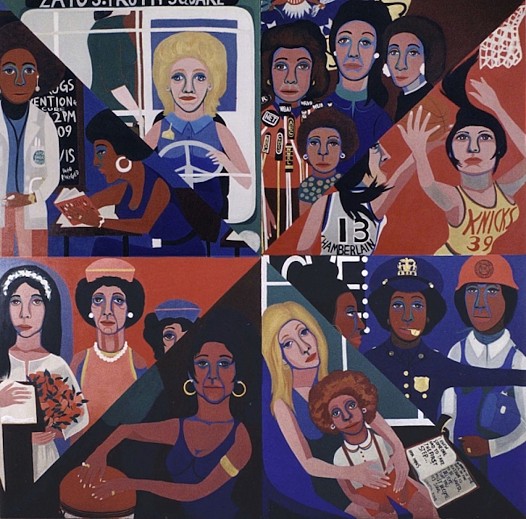 An Exhibition About Revolution that Keeps Faith with Ringgold

The Brooklyn Museum’s current, corrective survey, We Wanted A Revolution: Black Radical Women 1965-85, opens with an impressive eight-by-eight-feet mural painting. The work is divided into eight, equal triangular sections , each offering a view of women actively at work: suspended narratives like driving a bus or holding a press conference, extended across differences in age, race, and class.

In recent months when giving tours of this mural at this museum where I work in the Education Department, I most often stand in front of the wall text and encourage visitors to get close to the painting. I ask them to consider the scale of the canvas, to think of when it might have been painted, to imagine who it might be intended for. I ask them to see these women, and to reflect.

This work, For the Women’s House, was painted in 1971 by the artist, author, and activist Faith Ringgold. That year, Ringgold had received a grant from the Creative Artists Public Service program (CAPS), which stipulated the creation of a public work. By this time, Ringgold was already a prominent voice in the Black Arts Movement and the fight for gender and racial equality in the United States. Her artistic practice embodied these activist energies, critiquing US society, as well as art and academic institutions, for their systematic failure to acknowledge the contributions of women and people of color.