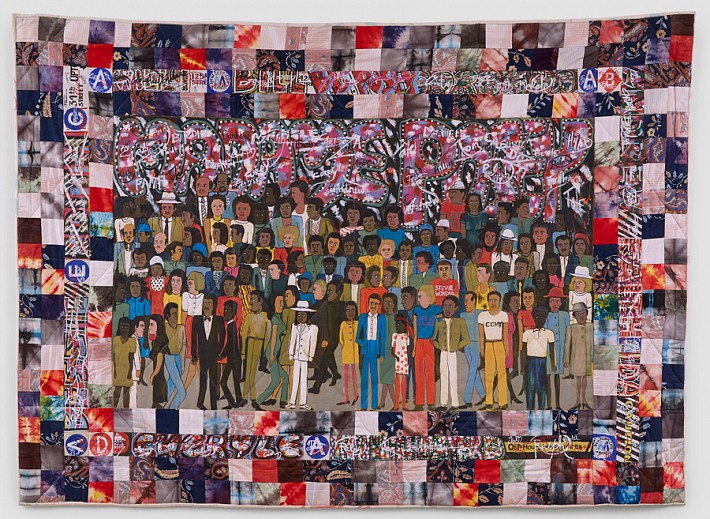 Against the backdrop of the civil rights movement in the early 1960s, Faith Ringgold began her ‘American People’ series (1963–67), in which she dissected the notion of the American dream to expose the uncomfortable realities of racial and gender inequality. Fusing pop art’s hard edges with the political ideals of social realism, and techniques of Tibetan painting with the graphic symbolism of West African sculpture and design, her practice occupies a unique space within the black arts movement of the 1960s and ’70s. This aesthetic originality is compounded by the fact that the figures and faces captured in Ringgold’s early painting speak to a distinctly American social world – a world of bloody interracial tension and psychological trauma drawn along the lines of ideology and ethnic difference. Following in the footsteps of pivotal figures of the Harlem renaissance, such as Jacob Lawrence and Romare Bearden, her work is imbedded within the cultural tradition of storytelling that has been central to the survival of African American histories.

The narrative arc of Ringgold’s own story runs parallel to the artist’s radical activism; before co-founding the activist group Where We At, Black Women Artists, Inc. in the early 1970s, she led a series of protests against the lack of diversity in New York’s Whitney Museum of American art, an institution that recently placed her work in an exhibition dedicated to protest. But perhaps the most enduring feature of the artist’s work is her commitment to the art of storytelling. In 1980, Ringgold collaborated with her mother Willie Jones, a fashion designer, to produce her first story quilt. Developing a tradition once practiced by her great-great grandmother Susie Shannon, who was born into slavery and produced quilts for plantation owners, Ringgold uses fabric to weave together personal stories and histories of African American experience. The author of several children’s books and a much-read autobiography, she once wrote: ‘I have always wanted to tell my story, or, more to the point, my side of the story.’