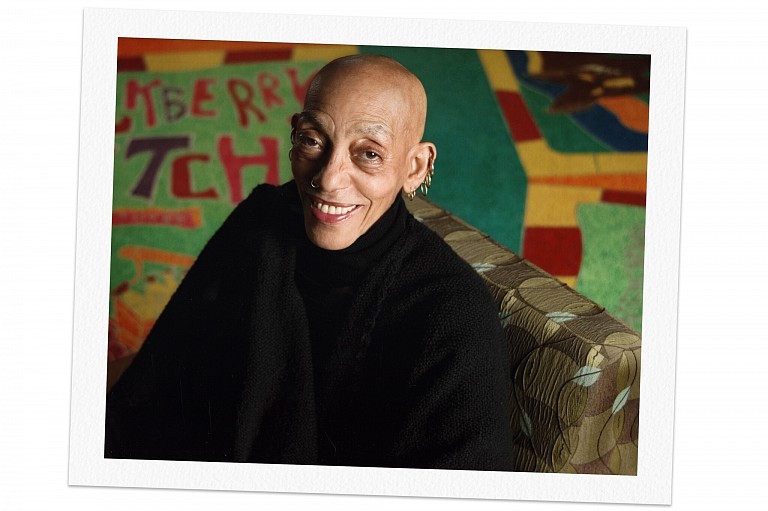 Each morning at 4, Aminah Brenda Lynn Robinson would rise from the couch in her living room in Columbus, Ohio, and, with her dogs in tow, commit herself to her many continuing art projects. She would start, perhaps meditatively, with the watercolors in her basement, before moving on to other pieces in other rooms.

Almost every part of her house-turned-studio had been given over to the tools of her craft: paint, brushes, journals, sketchbooks, buttons, fabrics, music boxes, found objects and what she called hogmawg, the sculptural material she made with pig grease, mud, homemade dyes and glue that gave her sculptures an almost petrified quality.

Her vast library, weathered from research, served as a source of inspiration. A steady diet of coffee and cigarettes kept her awake. She worked this way for years — up with the sun, down late at night, sleeping only a few hours before starting again.

In interviews, Robinson would say that art is a way of life, and the way she lived hers was grounded firmly in that notion. Her daily industry came out of a deeply held desire to tell Black people’s stories.

“By the time I reached 9 years old,” she wrote in one of her journals, “I was deep, deep into transforming and recording the culture of my people into works of art. The magnitude of research and study of Afro-Amerikans is what I have dedicated my life. My works are the missing pages of American history.”

She believed that life for her people in America was an act of near-superhuman perseverance, and she was determined to capture that history in every medium she could.

Over the years, Robinson developed a bespoke vocabulary for her projects. One central concept in her work was “RagGonNon,” the sometimes monumental mixed-media pieces that would “rag on and on” over time, as she encrusted them with beads, thread and even, say, shells, to communicate an abiding spiritual connection to Black history and identity.

Her “Water Street (The Legend of Chipo Village)” RagGonNon, a 60-foot-long piece that was shown at the Akron Art Museum in 2011, took nearly 25 years to complete. It depicts African-Americans going about their everyday lives on Water Street, a street in downtown Columbus that she learned about from an uncle. When that street later became Marconi Boulevard, Robinson wanted to capture the significance of the lives lived there that had been paved over.

The piece takes on a mystical quality, starting with a panel that, in stitched lettering, reads “In the Beginning” before the eye is directed to an embroidered map meant to represent the community’s connections to its ancestral past. Robinson layered fabric, snakeskin and thousands of buttons to make the bodies of the figures she depicted seem to rise up out of the piece.

“She says she was grounded in the African concept of sankofa,” Carole Genshaft, curator at large of the Columbus Museum of Art, said in a phone interview. Sankofa, a word in the Akan language of Ghana, roughly means “Go back and get it.” “I think that accounts for much of her passion to do pieces that included Africa,” Genshaft said, “before enslavement, the middle passage, enslavement, emancipation and migration.”

In Shepard, her Columbus neighborhood, Robinson was a beloved, if somewhat eccentric, figure, though her prolific portfolio took her to galleries and museums across the country and around the world. In a 2006 review of a show at the Brooklyn Museum, the New York Times art critic Grace Glueck described the exhibit “Symphonic Poem: The Art of Aminah Brenda Lynn Robinson” as almost overflowing its galleries.

“The nearly 100 pieces,” Glueck wrote, “include scroll-like books unrolling for more than 40 feet and a cluster of totemic sculptures with built-in music boxes ranging from 8 to 10 feet high.” She continued: “Besides its sheer visual pizazz, what’s compelling about Ms. Robinson’s art is that in its own garrulous, very personal way it ruminates on the history of Black migration to, and settlement in, the United States from early times to the present.”

Brenda Lynn Robinson was born on Feb. 18, 1940, in Columbus to Leroy Edward Robinson and Helen Elizabeth Zimmerman-Robinson. Her father, a custodian and an artist himself, encouraged her to draw from the time she was 3. Art was her first outlet of expression; she wouldn’t begin speaking until she was 5 or 6. “He would say, ‘Tell me, Bren, what do you see?’” Robinson recalled to The Columbus Dispatch in 2015. “So I would take out my little notebook and begin to draw. And that was my only way of communicating.”

She grew up the rebellious middle child of three sisters in Poindexter Village, one of the first public housing projects in the country, and would escape out of her bedroom window and climb down a tree to avoid going to Catholic school. In 1957 she enrolled at Columbus Art School (now Columbus College of Art & Design). A year after walking in the 1963 March on Washington, she married Clarence Robinson; they had a son, Sydney. The couple separated in 1971. In 1974, she bought the house that would become her studio, down the street from where she grew up.

She became a fixture of Columbus’s East Side, working at the public library and running art classes for children and adults for the Columbus Recreation and Parks Department. Her work can now be seen around the city, including at the Columbus State Library and the Ohio State University Wexner Medical Center.

“Aminah was sort of a larger-than-life personality when I was growing up here in Columbus,” Deidre Hamlar, co-curator of the Columbus Museum of Art, said in a phone interview. “She struck a formidable impression just upon meeting her. When most Black people are trying to assimilate and fit in, she definitely was not that person.”

She traveled to enrich herself and her work, and it was while on a study trip to Africa in 1979 that she was given the name Aminah, meaning “faithful” in Arabic, by an Egyptian holy man. She legally added it to her name the next year. In 1983, she and her sisters visited Sapelo Island, a barrier island off the coast of Georgia that is home to a community of Gullah people, to connect with distant relatives.

Her output continued in 1992, when she published “The Teachings: Drawn From African-American Spirituals,” a visual interpretation of spirituals as a means of expressing Black culture. “The spirituals,” she wrote in that book, “weaving together memories that carry us into the future, must not be forgotten. They are our stories, our chants, our dreams, our lives.”

She also illustrated children’s books, like “A School for Pompey Walker” (1995), by Michael J. Rosen, about a formerly enslaved man who builds a school for Black children. In 2004, she received a MacArthur fellowship and had a solo exhibition at the Museo Nacional de Bellas Artes in Chile. And in Manhattan in 2010, she presented several works with the artist Faith Ringgold, a friend, in an ACA Galleries exhibition called simply “Two Black Women.”

Still, despite her success, she suffered setbacks and hardships. After separating from her husband, she was on welfare, an experience that would give her a deepened sense of empathy for the poor and unhoused. But the greatest blow came when her son killed himself in 1994.

“She just completely cut everyone off during that time,” her niece Debra Ubamadu said. She poured her grief into her art, and started what became “Sydney’s Memorial,” another RagGonNon, which incorporated cloth, thread and music boxes.

Robinson died on May 22, 2015, after suffering from what she had described as heart problems. She was 75.

She left her entire estate, including her home, her art, her extensive library, all of her personal possessions and even her Chihuahua, Baby, to the Columbus Museum of Art, which has spent the last several years cataloging her work and her books. The museum opened “Raggin’ On: The Art of Aminah Robinson’s House and Journals,” a special exhibition showcasing her work, in November. It will run, with restrictions to prevent the spread of Covid-19, through Oct. 3.

Click Here to Read More at The New York Times