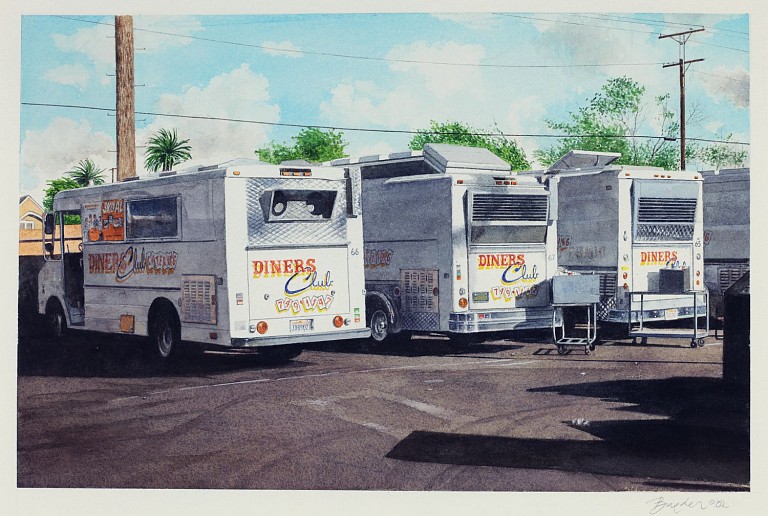 Why Does John Baeder Paint Diners?

John Baeder paints diners. His goal for the past three decades has been to record on canvas and paper just about every diner, roadside eatery, and virtually every possible monument of American consumer culture. His work has been shown in scores of galleries, collected by dozens of collectors, and reproduced in numerous books, magazines, and, appropriately, on postcards. He is a master of photorealism, but his work is more than mere technique and process. Each of his detailed images is a document of a disappearing design epoch. They are not nostalgic reprises of bygone days, but paeans to the guileless moments when common consumption was couched in vernaculars unique to the regions in which they were fostered.

But Baeder was not always an artist-documentarian. He began his life in the service of clients as an art director at McCann-Erickson. Unlike many who failed to escape advertising’s pull, Baeder found the intestinal fortitude to move elsewhere and onward, with his intestines intact.

I long admired Baeder’s work since before Harry N. Abrams published Diners by John Baeder over twenty-five years ago. But I never knew why he was able to break from the art directorial rat race to the calmer pace of soulful painter. I recently asked him to explain why. He responded frankly albeit poetically.

For the Atlanta-native, art direction wasn't creatively satisfying. “Spending millions of dollars of client's money became demoralizing,” he told me. The agency system became stifling. And yet working in a gregarious atmosphere was a high, as was working with very gifted photographers, illustrators, TV production houses and musicians. “It was fun, but shallow,” he admits. Agency life was a "boot camp" for the art world. And like the Pop Artists, Warhol and Rosenquist who were toilers in the commercial art world, Baeder found the six degrees of separation between advertising and art. He left the business out of “self-respect, to see if I could do what I loved most and paint full time.” Fortunately, an exhibition at a prestigious gallery was scheduled; his art dealer was Ivan Karp, who was a pioneer of the pop-art movement, and was then advocating the photorealism movement. “It was the completion of a fantasy I had since a teenager,” said Baeder. “I was observing George Beattie, a well known southern artist remove paintings from his station wagon for a show at the High Museum of Art in Atlanta. I said to myself, ‘I'm going to do that someday...’ I did. It was September, 1972, on West Broadway, with my station wagon, an extension of myself, that took me to magical journeys, and images I'm still painting.” He paid homage to the car in the canvas titled “John’s Diner with John’s Chevelle.”

But what was it about diners that appealed to his passions? Did Baeder choose diners, or did they choose him? For the answer a little retrospection is required.

Growing up in Atlanta there were no diners, per se. Diners are New England bred, born in Providence, Rhode Island. Most manufacturers were in New York and New Jersey. “Around six years of age, I had the opportunity of going to a ‘restaurant’ that had an exposed grill and low counter, like a real live diner, with short stools where I could sit in amazement becoming mesmerized by the cacophony of the grill men going about their duty,” recalls Baeder. “My eyeballs astonished at their dancing and juggling.” Yet even more inspiring was riding in railroad train dining cars, ordering his meal with a pencil on a light green newsprint stock pad, while gleaming silverware welcomed his sensitive nature to all “the surrounds, sounds, smells, and waiters who were dressed in their crisp white coats, contrasting their dark skin with the same purity as the table setting.”

As the train chugged on, Baeder imagined the backsides of small towns were little paintings, framed by the large expanse of window. “I was on a rolling museum, complete with chicken ala king, and aspic salad.”

He visualized diners as temples from lost civilizations and this intrigue triggered a photographic quest. At that time there was no indication of any future as a painter, much less using diners as subject material. He documented them with no particular agenda other than the solace he felt as a little boy in the dinning car. Diners were stationary dinning cars.

Baeder turned into a manic collector of diner postcards, especially a genre of simulated linen cards. “I had always negated the linen era postcard because of their gross retouching, losing so much reality for the sake of ‘romancing’ an image. I always felt cheated it wasn't real looking. I discounted them.” But when he met his first postcard dealer at an antique show he fell head over heels for linens. “The retouched image surfaced into a very surreal visual excitement,” he said. “I saw them as small paintings, and wondered what they would look like enlarged and transformed to canvas. The linen stock was used to trick the consumers eye it was faux canvas.” Baeder said he forgave the retouching, and filled in the blanks. The postcard bug bit; he started to go to shows with more dealers from local and regional areas and was introduced to the photo postcard. “Now, a new reality was upon me; traveling with a keener focus, more detail, and realizing these small 3.5x5.5" images were becoming important for me to pay deeper attention. Getting to these parts of the American landscape, one had to get gas, eat, and sleep.” These places had more visual impact as architectural and roadside artifacts. Baeder got more serious and placed classified ads in antique tabloid newspapers to locate gas stations, diners, motel, and tourist camp postcards. Postcard lingo calls them "approvals". You pick what you want, write a check, return the rest. “Voila! Joy! My mailbox began to overflow daily,” he joyfully recalls.

As an advertising art director, Baeder worked with the best still life photographers in New York. One day a rep came to see him with a photographer named Dick Steinberg. “I intuitively knew he was a painter from looking at his images. There was a spirit that the other photographers, as great as they were, didn't have.” The two were instantly drawn to each other on an aesthetic and intellectual basis. Steinberg had been a painter, but needed to provide for two families; the advertising business kept him busy. One of their con-nections was the love of Marcel Duchamp. “Dick projected his desires to paint again on to me and urged me to leave the business. I still remained cautious. As I was beginning a collection of more postcards, images that appealed to me were starting to come into focus: diners, gas stations, motels, tourist camps — the mainstays of roadside culture. Photo-realism was just beginning to be noticed in the art world. I had gone to an exhibition that had a few paintings I related to. I knew none of the artists, it didn't matter what they were doing or who they were. I recalled saying to my wife at the time, 'I can do that, and better...'"

Baeder’s shift to painting occurred when he saw an Ed Ruscha installation at the Iolas Gallery in New York. He had purchased Ruscha’s small booklets of gas stations, swimming pools, and the Sunset Strip. He related to his unpretentious point of view. “The paintings on view were the beginnings of the word series. I was smitten,” he recalled. He had always identified with the social realists. But he also had a compulsion to enlarge postcard images too, and once he made the linen image appear retouched, it would take on a surreal nature — that’s when his “calling started to happen.”

Baeder recalls stretching a 42x66" canvas, the exact scale of a 3.5 x5.5" postcard. It sat blank for a long time. He couldn't decide what image to paint first. “Excitement and fear mixed together are like oil and water,” he confessed. “A particular diner stood out — it's retouched areas shouting to be re-applied, its presence in need for more attention. It felt good to paint flat areas representing the dull printed halftone. Using acrylic paints added to the flatness. I did it.” He completed his first painting.

After that he wanted little to do with the increasingly tedious days producing ads and TV commercials. All the new campaigns and new accounts seemed decidedly senseless. Every night he feverishly painted. His next painting was a gas station, then a motel, and then a tourist camp. He painted the Copperplate Gothic font that so many cards of that era used for their descriptions on the upper or lower corners of the white borders.

Ivan Karp of OK Harris Gallery came to Baeder's small apartment on a Sunday morning on one of his usual forays to visit new artists. No other art dealer had such passion and zeal to find new artists. He saw the four raw paintings, as Baeder called them, and immediately offered him a show to open the new season in September. It was the middle of February 1972. “I quit my job at McCann-Erickson, the first of April,” Baeder told me, “and entered a new world — my new world — a vital rebirth.”