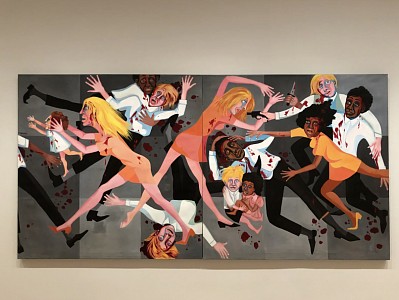 When crowds push their way into the newly renovated Museum of Modern Art on October 21, the expectations will be sky-high. MoMA—which closed its doors on June 15 to complete a $450 million makeover—is, after all, the home base for the modernist movement and the very embodiment of cultural currency. Much like Paris's Louvre, or London's National Gallery, MoMA is a name that's synonymous with world-class art. Opened in 1939, its walls have entertained hundreds of millions of visitors while evolving, in shape and in size, by the hands of the world's most celebrated architects. During the ’50s and ’60s, Philip Johnson was in charge of its metamorphosis. A decade later it was Cesar Pelli who led the expansion. Then it was a major renovation in 2004 by Japanese architect Yoshio Taniguchi that made the space more capacious. But that's not why people kept coming. It was, of course, to see works by the names they've heard before: Van Gogh, Picasso, Matisse, O’Keeffe, Pollock, Warhol. And while these timeless giants will be on display when MoMA reopens its doors later this month to a fresh layout—this time courtesy of Diller Scofidio + Renfro in collaboration with Gensler—guests should be more excited to view the works by artist they've likely never heard of before.

This latest renovation to New York's second most trafficked museum (in 2018, 7.36 million visited the Metropolitan Museum of Art versus roughly 3 million at MoMA) was two part: One involved architecture and the new walls that went up, while the other incorporated new art that is being hung on those very walls. To be sure, renovating MoMA is different from redesigning nearly any other museum. The task requires converting an iconic space of the 20th century to one that’s more fitting for the 21st century—all within the strict confines and limitations of Manhattan construction codes. Diller Scofidio + Renfro, who recently completed The Shed in New York's newest neighborhood, Hudson Yards, in collaborating with Gensler, took on the task of expanding a museum that had been designed and redesigned many times before they arrived to the site.

"We wanted to maintain the original DNA of MoMA that had been created by those previous designs—white-box spaces, bringing glass to the galleries—while also pushing past this, in effect pushing modernism in a new direction, too," says Ben Gilmartin, a partner at Diller Scofidio + Renfro. It was once said by Taniguchi during the 2004 renovation that, were the museum to "raise a lot of money," he would provide good architecture. "Raise even more money," Taniguchi continued, "and I’ll make the architecture disappear." Much can be said for DS+R's work on the $450 million project. "Working in a surgical manner, our overall goal was to create a harmonious experience for the visitors," adds Gilmartin. "In other words, if they weren't paying attention, they wouldn't notice they're moving between multiple buildings."

What Gilmartin is referencing is MoMA's westward expansion. Now, new galleries have been erected in the former American Folk Art Museum site. From there (walking toward Manhattan's Sixth Avenue), visitors stroll into the base of 53W53, an all-new skyscraper by starchitect Jean Nouvel. While the westward expansion yields additional room (in total, 165,000 square feet more of gallery space), it also better opens the museum to the city that cocoons it. Floor-to-ceiling windows allow ample natural light to flow through, while also allowing the public a peek into the building. "The structure is now better connected to Midtown Manhattan," says Gilmartin. "Before, visibility was a bit constrained. But now, we feel the new design allows for the public to have immediate access to art from the street, as well as when they walk through the doors." To that end, MoMA is now allowing the public free access to the entirety of the ground floor, which includes the sculpture garden.