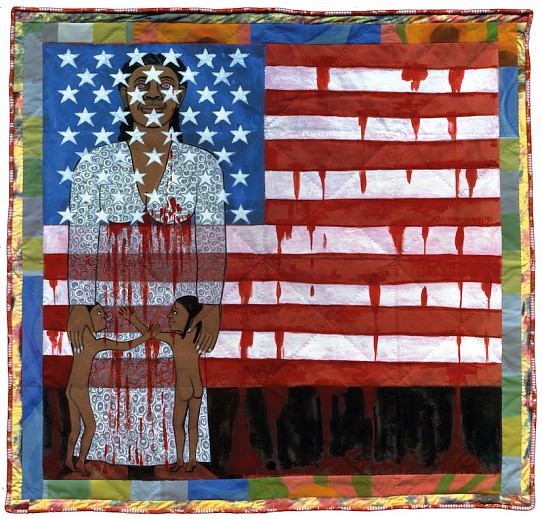 In 1990, Verso Press republished Black Macho and the Myth of the Superwoman—a now-notorious critique of the 1960s-era Black Power Movement by Michele Wallace, a feminist writer and also the daughter of artist Faith Ringgold—with a new introduction in which the author reflected on lessons learned in the years after her book’s original publication in 1978. “It is my conviction that the only way to avoid repeating the mistakes of the past is to openly discuss them,” Wallace wrote. “Whether in nations, families, or individuals, the practice of being on speaking terms with your past lives is the only thing that makes it possible to trust yourself or anyone else. … The thing that still remained to be worked out was my relationship to my family as a writer and as a woman.”

Stunned when Black Macho first came out by the assertions of her daughter, Ringgold felt the need to respond. In 1980, she wrote a sharp missive quoting passages from the book and addressing them so plainly that one could mistake it for a private family conversation accidentally shared with strangers. But she didn’t make it public—until 2015, when at the age of 85 she published it as a book, A Letter to My Daughter, Michele Wallace, “as a way of confirming and protecting my legacy of a Black woman, mother, and artist in America.”

Part of that legacy is on display in Ringgold’s current show at Serpentine Galleries in London—her first solo exhibition for a European institution, on view through September 8. Her five decades of artistry are surveyed chronologically and presented in groups of series in which the creative and intellectual context of the Harlem Renaissance (Ringgold was born in Harlem, in 1930) is evident. In rooms that have been crowded with tourists, student groups, and other silently contemplative guests are works like lustrous and detailed story-quilts (among them Jazz Stories: Mama Can Sing, Papa Can Blow #1: Somebody Stole My Broken Heart) from a lineage that Ringgold learned from her mother and grandmother, both former enslaved Africans in Florida.