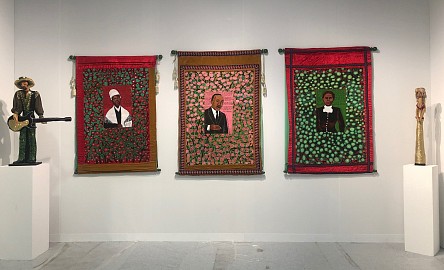 The Armory Show: A Mini Survey of Faith Ringgoldâ€™s Legendary Practice is on Display at ACA Galleries

“We decided to really show people what she’s been doing every decade,” said Dorian Bergen, the president of ACA, who works directly with Ringgold.

“Faith Ringgold: Change” is on view in the Focus section of the New York City art fair where a selection of galleries has been invited to mount one- and two-artists shows. Organized by Lauryn Haynes, curator of contemporary art at the Crystal Bridges Museum of American Art, 29 galleries are participating in the Focus section this year, showing works that “explore identity through figuration of both real and imagined forms.”

Established in 1932, ACA is recognized for its progressive program. Since its founding, the gallery has supported American artists from a variety of backgrounds, including African American artists such as Romare Bearden, Jacob Lawrence, Charles White and Richard Mayhew, when few other galleries were willing to do so. Ringgold has been represented by ACA since 1995.

STORYTELLING IS A THE CENTER of Ringgold’s practice. For more than 50 years, she’s been making art that documents the American narrative. She’s explored segregation and the Civil Rights Movement, considered black pride and the politics of skin color, and reflected on her personal experiences—sharing how it felt to be a black woman in the 1960s and the decades hence.

More recent works on display at the Armory Show are particularly personal. Her Coming to Jones Road series is realized in two mediums: story quilts visually defined by fields of trees and tankas centered around portraits of social justice pioneers. The title for the series derives from the name of the street she lives on in Englewood, N.J. When she moved there in the early 1990s she was met with resistance.

In her artist statement, Ringgold writes, “…our white neighbors (unsuccessfully) sought to deny us the freedom to live there. Freedom, you know, is not free—It took me six years to realize my dream of a beautiful studio surrounded by a beautiful garden.”

Bergen said it was a difficult situation. “Her neighbors did not want her on Jones Road. And you know why,” she said. “And they brought her to court and it was very distressful and very disturbing. So she created a whole body of work called Coming to Jones Road. But you wouldn’t even know it’s about the slaves going from the South to the North. You look at it and it looks beautiful and insightful. If you don’t know the story. You would never guess.”

RINGGOLD MADE HER FIRST STORY QUILT because she couldn’t get her autobiography published. She responded to the disappointment by inserting her storytelling directly into her work. Among the story quilts exhibited at The Armory Show, “Change 2” documents the artist’s 100 pound weight loss. “Tar Beach #2” is a version of her most well-known quilt which captures a Harlem rooftop at night with her young subject dreaming about flying over the George Washington Bridge. The image is about freedom and fantasy.

“It was getting so frustrating for her because she had a lot to say,” Bergen said. “She wrote her autobiography and nobody was interested in it. So she started to write her story on her work and then she just took it from there and then she became a story writer.”

In 1995, Ringgold finally published her autobiography. Her “Tar Beach” quilt inspired a children’s book and the artist has authored and illustrated more than a dozen additional volumes for children.

Ringgold’s “Black Light Series #11: US America Black” is also on view in ACA’s booth. She envisions the “Black is Beautiful” mantra and movement in the 1969 painting. The work features nine faces depicted in varying skin tones in a geometric composition.

“US America Black” was among the works included “American People, Black Light: Faith Ringgold’s Paintings of the 1960s” (2010-13), the traveling exhibition that focused on the artist’s American People (1963-67) and Black Light (1967-70) series. The show re-introduced Ringgold, who had become known for her 1980s story quilts. The content in the 1960s paintings resonated and reminded the art world of the strength of her early painting practice.

Bergen said curators knew about three paintings from the American People series—”Die”; “Flag for the Moon: Die Nigger”; and “The Flag is Bleeding”—and over the years had requested them for shows. Seeing the full body of work from the 1960s, however, was a revelation.