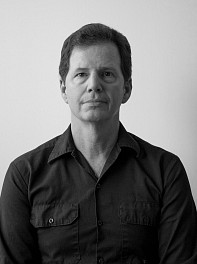 Joseph Peller’s paintings, works on paper, and sculpture explore the haunting notions of isolation and ambivalence inherent in the unnoticed rituals of modern urban life. He prefers working from life and direct observation is always his point of departure in his exploration of the urban condition. His sketchbook drawings and oil studies, done in situ, seek the “essential incident” which he supplements with his visual memory to inform the development of his larger work. Peller enjoys experimenting with a wide range of pure and mixed techniques involving oil, pastel, various printmaking procedures, drawing and sculpture.

Joseph Peller’s independent development generally favored private affiliation with artists whose body of work shared common themes with his personal vision. Initially, he studied with A.K. Scott, a Canadian artist and pupil of the distinguished American painters Charles W. Hawthorne and George Bellows. During formal study at the School of Architecture at the University of Toronto he maintained a private liaison with Canadian painters Kenneth Forbes and Cleve Horne. Joseph Peller’s development continued in New York working with noted artists Thomas Fogarty Jr. and Hilary Holmes at the Art Students League, and Ron Sherr at the National Academy of Design. During this time he received a Revson Foundation Grant from the Art Students League of New York in 1985.

Peller has exhibited in solo exhibitions in New York and Toronto, and has participated in several group exhibitions in the United States, Canada and Europe. His work has received recognition in national exhibitions and mention in several publications including The New York Times, New York News Day, The Wall Street Journal and American Artist Magazine. In 2013, Peller was awarded a printmaking residency at the Guanlan Original Printmaking Base as a guest of the People’s Republic of China. He is the recipient of the Alden Bryan Memorial, the Dr. David Soloway Memorial Award, the Len G. Everett Award, and the National Sculpture Society Award for Figurative Sculpture. He has taught at the New York Academy of Art and currently teaches Painting and Composition at the Art Students League of New York. The artist is represented in public, corporate, and private collections in the United States, Canada, and Europe.