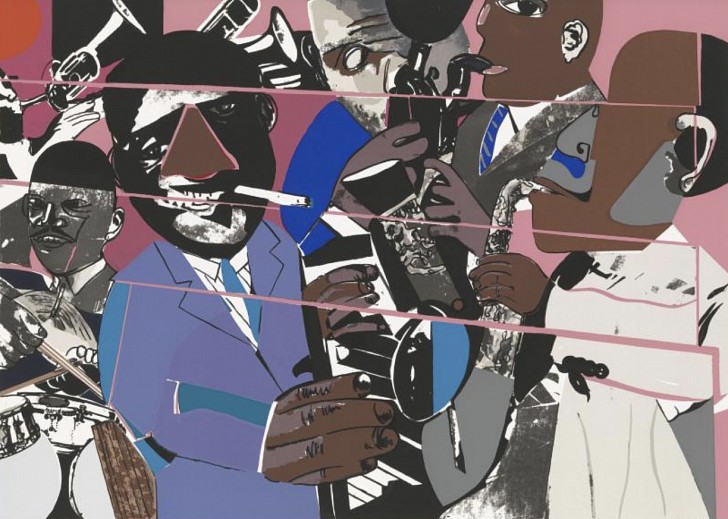 The visible portion of the electromagnetic spectrum shades from violet to red. African American artists have their own set of frequencies. “Spectrum” tunes into their transmissions at Ringling College, where curator Tim Jaeger samples the artists’ broadcasts from the dawn of the 20th century to now. This exhibit’s 23 featured artists come in loud and clear, but from different places.

Gayle Fulton Ross reveals and conceals. Her “Modern Sojourner” (2006) depicts a middle-aged African American woman with a serious, downcast expression. She’s lost in thought, not posing, a formidable presence. A contemporary reincarnation of Sojourner Truth? No guess. It’s what the title says. Ross’ “Coming from Under the Mask” (1995) is more ambiguous. A stylized black woman in a ballet pose, wrapped in veils, and holding a traditional African mask. Is she taking it off or putting it on?

Romare Bearden’s “Jazz II Deluxe” (1980) is a fractured be-bop fairy tale. A kitchen-sliced image of a jazz quartet, in clashing keys of hot and cool color. Like some cubist cartoon, the musicians’ faces are pieced together from cutout elements. An eye; a cigarette; a giant hand reaching for a keyboard. The image is dissonant, playful and shattering. Bearden paints the way jazz sounds.

Jean-Michel Basquiat’s lithograph “Supercomb” (1988) is a hybrid of graffiti art and manic doodle. A dense collision of words and images against a screaming yellow background. The scribbles and scrawls include a doughnut, a cowboy, a robot, the artist’s Paris address, and a man bending the unbreakable SUPERCOMB. Neat it’s not. It’s art as stream-of-consciousness. Basquiat dumped the jangled contents of his mind on a piece of paper. Want to know what he was thinking that day? This is it.

Jacob Lawrence is obsessed with construction. In his series of colorful paintings, black carpenters hammer, drill and saw in upscale homes they won’t live in. A recurring theme, and either a metaphor or accurate reporting. Lawrence’s “The Carpenter” (1957) is a stark pen-and-ink drawing that frames the issue in black-and-white. Like William Blake’s “Ancient of Days,” a frowning carpenter studies a blueprint with his arms outstretched. He’s clearly not happy. A plumb bob hangs at a crazy angle. It tells him something’s not on the level.

Richard Mayhew’s “June Tone Poem” (1997) straddles the boundary of abstraction and representation. Are those trees in the background or a blue ink blot? All of the above.