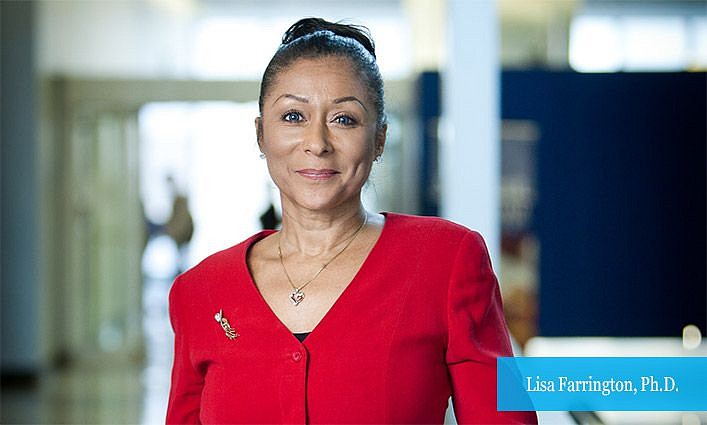 Lisa Farrington, Ph.D., Distinguished Professor and Founding Chair Emeritus in the Department of Art & Music, has lived a life surrounded by art—whether creating it, analyzing it, writing about it, or teaching a course, art has been at the center of her life. Over the years, her work has garnered a number of accolades, most recently the Lifetime Achievement award from the Anyone Can Fly Foundation. The award, which honors master artists and scholars of the African diaspora, was especially meaningful because it came from Faith Ringgold, the artist that awoke Farrington’s passion for African-American art. “Growing up I didn’t know much about African-American artists because African-American art wasn’t being taught in most schools at the time. It was during an art class that I took while pursuing my bachelor’s degree at Howard University, a Historically Black College, that I was introduced to Faith Ringgold’s work. We were shown her painting ‘American People Series #20: Die’ and I was completely blown away by her work. That piece now hangs next to Picasso’s ‘Demoiselles d’Avignon’ at the Museum of Modern Art.” Years later, while attending the CUNY Graduate Center, Ringgold’s work took center stage in Farrington’s doctoral dissertation, which later became two books, and put her on a path toward educating at John Jay.

It was during her time at the CUNY Graduate Center that Farrington discovered an interest in teaching. “I got my first teaching job as a teaching assistant at Hunter College and fell in love with it. Up until that point I had been a creator of art, a curator working in museums, an art seller in private galleries, and a writer, but teaching gave me the greatest joy.” Farrington took on a full-time professorship at Parsons School of Design, where she taught for 15 years before coming over to John Jay in 2007. “I was invited by two John Jay faculty members to apply for a position in what was then the Art, Music and Philosophy department. Six months in, Philosophy separated from the fine arts to form their own department, leaving the remaining faculty wondering what to do. So, I was asked to write and put together a proposal to form a new Art and Music department.” Her proposal was approved and the department was established in July 2008. “It was the most fun, wonderful time getting this department up and running,” says Farrington, describing the team’s effort in shaping the mission of the department, and opening the Anya and Andrew Shiva Gallery on 11th avenue. “The entire College, from the leadership team to the students, were so incredibly supportive,” says Farrington. “They all understood how art enhances the educational experience.”