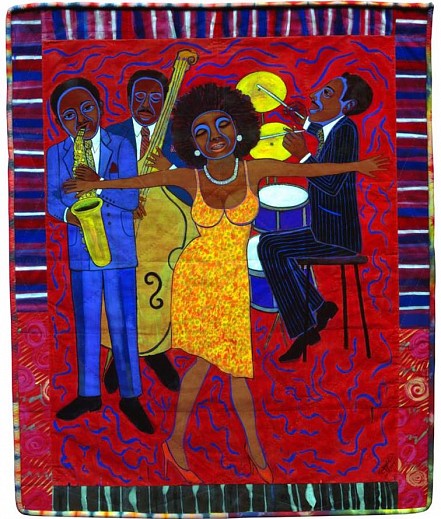 Faith Ringgold: The artist who captured the soul of the US

As a new exhibition of art by Faith Ringgold opens in London, the 88-year-old talks to Arwa Haider about her early life and how she created subversive works with postage stamps and story quilts.

“As an artist, I want to tell my story of the times – what I’ve lived through; what we’re going through now. Often, people don’t want to see that… but I don’t do what people want to see; I do what I can.”

These days, crowds at major galleries clamour to see the work of Harlem-born painter/sculptor/writer and performance artist Faith Ringgold – but she has fought hard for that platform. Ringgold’s art is vivid and far-ranging (embracing over a dozen media, from her trademark narrative-based ‘story quilts’ to iconic masks and stained glass); it captures the soul of the US – its pop culture and politics – and lays it bare. It is fantastically vivacious, but also frequently speaks deeply uneasy truth to power.

Over the past decade, there has been a kind of mainstream awakening; Ringgold has proved a stand-out at acclaimed group shows including Tate Modern’s Soul Of A Nation: Art In The Age Of Black Power (2017), and inspires dedicated exhibitions. Her high-profile fans include Oprah Winfrey, Bill Clinton and the late Maya Angelou. A celebration of Ringgold’s art – with many previously unseen works – has just opened at London’s Serpentine Gallery; it is, Ringgold says, “a survey, not a retrospective”. Pieces from decades ago still feel intensely pertinent, and close to home.

In the 2004 book A View From The Studio (with Curlee Raven Holton), she explains: “I grew up in Harlem during the Great Depression. This does not mean I was poor and oppressed. We were protected from oppression and surrounded by a loving family.” Her neighbourhood was also home to the visionary jazz artists and poets that had fuelled the Harlem Renaissance; local legends like Langston Hughes and Duke Ellington were family friends. Ringgold’s mother, a talented seamstress and fashion designer, would later help her to develop the concept of ‘story quilts’: a portable alternative to large heavy canvases, ornately decorated, and updating a US folk-craft tradition with sharply modern statements.

Now aged 88, Ringgold speaks in warmly upbeat tones; she’s elegant yet steely, and also unmistakeably no-nonsense, exclaiming with a laugh: “In my family, there was no such thing as: ‘you can’t do that’… ‘yes, you can!’” In 1950, Ringgold became the first black scholar and woman to study art at the City College of New York (before her, only white men had been admitted to its ‘liberal arts programme’).