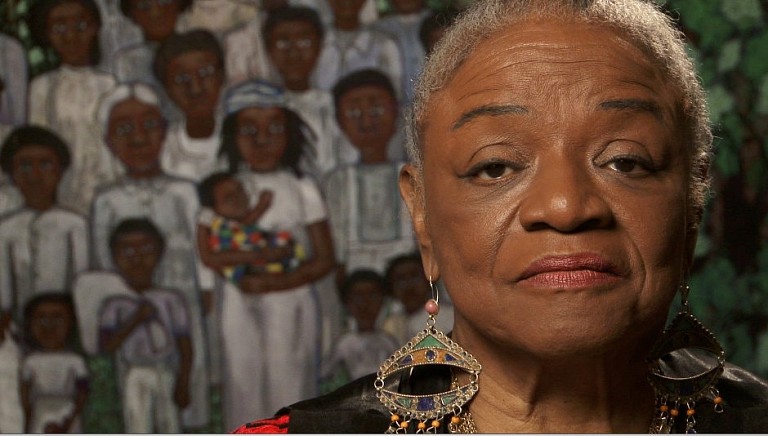 For Faith Ringgold, the Past Is Present

LONDON — The artist Faith Ringgold was visiting the Rijksmuseum in Amsterdam in 1972 when a museum guard pointed her in the direction of a display that would transform her career.

The guard urged her to head downstairs and see a collection of Tibetan thangkas — delicate paintings on cotton or silk that are used in Buddhist meditation. This new form enabled her to roll up her paintings and move them around without the help of her husband.

Three of her earliest thangkas — “Slave Rape #1,” “Slave Rape #2” and “Slave Rape #3” — will be exhibited in the Survey sector at Art Basel Miami Beach by the London-based Pippy Houldsworth Gallery. The brightly colored paintings, which are also her last oil paintings (she switched to acrylic) represent three nudes in verdant surroundings. Their faces represent Ms. Ringgold herself (a pregnant woman wielding an ax) and her two daughters.

“I became a feminist out of disgust for the manner in which women were marginalized in the art world,” Ms. Ringgold, 89, said in an email interview. “I began to incorporate this perspective into my work, with a particular focus on black women as slaves and their sexual exploitation.”

“The ‘Slave Rape’ series, along with my other works of the ’70s, were heavily inflected with my feminist perspective in both content and aesthetics,” she added.

Ms. Ringgold is among a group of female artists to receive recognition late in life. (Others include Louise Bourgeois, Yayoi Kusama and Rose Wylie). A career survey at the Serpentine Galleries — her first exhibition in a European institution — ended in September and opens next year at the Bildmuseet in Umea, Sweden, then at the Glenstone Museum in Potomac, Md. Meanwhile, her powerful 1967 painting “American People Series #20: Die” is on view at the Museum of Modern Art in New York City.

“I am fully aware of the attention I am now getting in the art world, and grateful,” she said. “But I am also aware that it has taken a very long time, for I had to live to be 89 years old to see it happen.”

She said female African-American artists were still underrepresented. “Even as many more women are hanging on the walls of the major museums, such women are predominantly white,” she noted. “Also, there is a bias even in the selection of black women, favoring those who have little or no politics.”