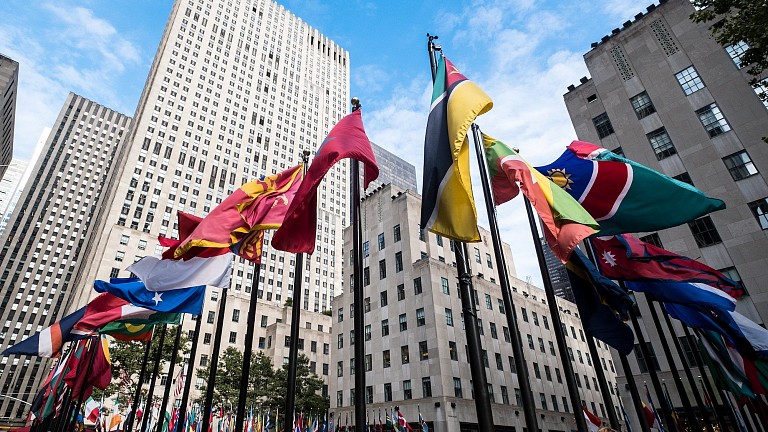 A public art competition launched last week that asks New Yorkers to submit designs for the iconic flags that surround the Rink at Rockefeller Center. Led by the site’s developer Tishman Speyer, “The Flag Project” is looking for artwork that celebrates New York City, whether it be through graphic design, a drawing, or collage. Winning designs will be made into flags and flown from Rockefeller Center’s 192 flagpoles this August as part of a temporary exhibit.

“It is our aspiration that Rockefeller Center in 2020, much as it did when it was first built almost 90 years ago, symbolize the strength, perseverance, and beauty that is New York,” EB Kelly, who oversees Rockefeller Center for Tishman Speyer, said in a statement. “The Flag Project is a chance for us to honor the city and people who created our campus and reaffirm our longstanding commitment to public art.”

New Yorkers of all artistic abilities are invited to submit their designs, which if selected will be produced on an eight-foot by five-foot flag. A number of notable New Yorkers and artists have agreed to design some of the flags, including Jeff Koons, Marina Abramovic, Sarah Sze, Steve Powers, KAWS, Laurie Anderson, Hank Willis Thomas, Carmen Herrera, Shantell Martin, and Faith Ringgold.

The flags around the rink usually represent the 192 nations recognized by the United Nations. They have changed or special occasions, including rainbow flags for Pride and gold and silver flags during the holiday season.