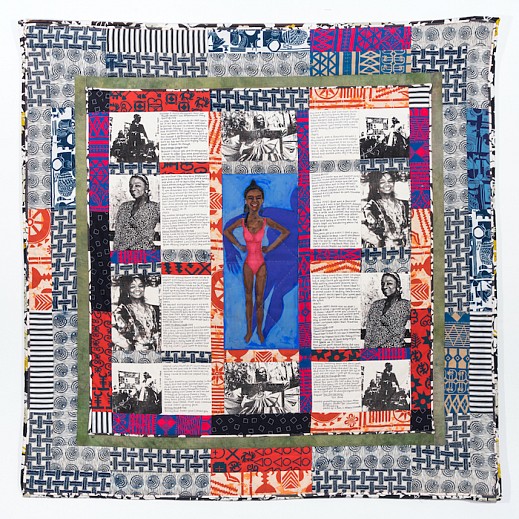 LONDON — For almost 60 years, Faith Ringgold has delicately interwoven the autobiographical and archetypal, the tragic and celebratory, and told stories which have too often gone untold. A small but punchy retrospective at London’s Serpentine Gallery (the first in a European institution) is a testament to the extraordinary range and power of her works.

Ringgold was born in Harlem in 1930. It was the Great Depression. It was also the Harlem Renaissance. She grew up in a lively creative milieu which included figures like Billie Holiday, Langston Hughes, Duke Ellington, and James Baldwin, as well as her fashion designer mother and jazz pianist father. After graduating from the City College of New York with a degree in arts education (women weren’t allowed to get degrees in fine art at that time), she started creating her artistic oeuvre, drawing on European Modernism, African design, and American folk art.

The Serpentine’s show begins with Ringgold’s painterly survey of American society in the mid-1960s, American People (1963-7). She created the series as a record of the growing Civil Rights movement which played out on the streets but was rarely reported in the news. One painting depicts a “Mr. Charlie” (1964) (an imperious white man), staring creepily out from the canvas, his hand on his chest in a gesture of faux sincerity. Another shows a demure “American Youth” (1964), based on Ringgold’s brother Andrew, who was beaten in a racially biased attack. The works are painted in an ironic palette of red, white, and blue.

In a work from a later series, The American Collection, a dreadlocked Statue of Liberty cradles a Black baby in one arm and holds up her flaming torch with the other. Around her, dozens of slaves flail in the sea, drowning, while the ship that transported them burns in the background. “We came to America” is the title of Faith Ringgold’s painting — a damning portrait of the land of the free.

In the 1970s, Ringgold became an activist — by desire, but also by necessity. “I remember when I was young,” she said in a recent interview, “and I would go into a gallery to show my work, the gallery dealer would look at my legs, but not my art.” In 1970, Ringgold and some fellow demonstrators placed eggs and tampons around the Whitney in protest against the consistently small percentage of women artists on display in its annual exhibition of contemporary art.