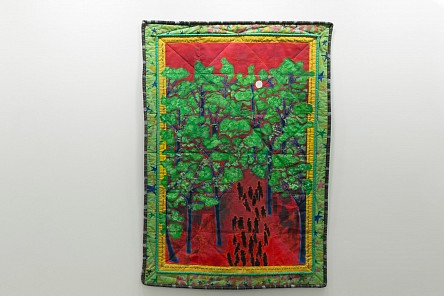 88-Year-Old Artist Faith Ringgold: "There Is Power In Ageing"

“There is power in ageing,” Faith Ringgold declares. We are talking about her forthcoming project, Ageing-aling-aling, but, coming after a wealth of stories, narrated in the slinky Chucs café next to her first European retrospective at the Serpentine Gallery, the statement feels a little redundant. At 88, and as engaged as ever, the multidisciplinary artist has witnessed numerous landmark social shifts - and all the more extraordinarily, been at the centre of many.

Born during the Harlem Renaissance in the New York borough in 1930, artists such as Duke Ellington, Langston Hughes and Jacob Lawrence were part of the fabric of her daily life. Sonny Rollins was her childhood best friend. “It made me know I could do it [too]," Ringgold asserts, of launching a career as an artist. “There’s no problem here except what people want to give me.”

She made good on that belief. For over five decades, despite the significant racial and gendered barriers she has faced, Faith has created pioneering works of art. During the civil rights and feminist movements of the 1960s and 1970s, Ringgold was on the frontline as both activist and prolific artist. The former was the decade that incubated two of her best-known series, American People (1962-1967) – audacious portrayals of racial structures and tensions – and Black Light (1967-1969), dark rainbows of black faces, selected works from which feature in the Serpentine exhibition.

Ringgold has always been concerned with story-telling, partly as a result of living through what’s now termed the Great Migration, the period in which millions of African-Americans moved from southern to northern US states to escape life-endangering racism between 1915-1970. Remarkable tales were told in her living room. “There was no coming to New York and staying in a hotel, not back then,” Faith explains, “So, mother would put [people] up.” Silently, eagerly, throughout her childhood, she would stay up to listen to the odysseys of house guests, “It wasn’t ‘You just go from Florida to New York’ – it took months,” she recalls.

Ringgold would continue to revisit the migrants’ stories, noting parallels to her own. Filing for approval to build a studio on the plot of her freshly purchased New Jersey home in 1992, for instance, Ringgold discovered her new neighbours were taking her to court. A lawyer had been hired to “protect” them, apparently “because I wasn’t going to be any artist, I was going to be having parties,” she relates. Her neighbours imagined her atelier would be “a house where you have [...] people coming and going,” making the area “unsafe for their children”. It was racism so overt it nearly amused. “I said, ‘Oh, what is this? This is fabulous!’”