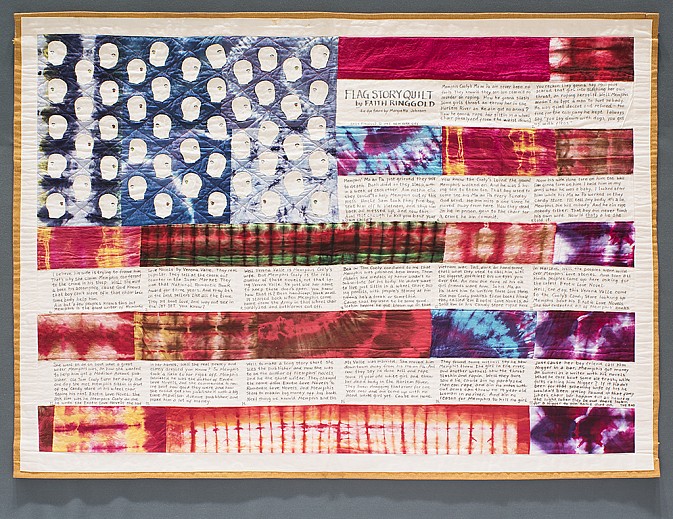 For Faith Ringgold, the American Flag Has Always Been a Potent and Powerful Symbol

THE AMERICAN FLAG, its design and all that it symbolizes, is the basis for some of the most politically potent and astute work Faith Ringgold has made over past half century.

In 1970, she helped organize the “People’s Flag Show” at the Judson Memorial Church in Manhattan’s West Village. Featuring about 100 works invoking the American flag, the exhibition was mounted as a protest against laws that restricted the use and display of the symbol. The show opened on a Monday and that Friday, Nov. 13, Ringgold and two other artists, John Hendricks and Jean Tuche, were arrested.

The U.S. Attorney General’s office charged the Judson Three, as they became known, with desecration of the flag and shut down the exhibition. They were ordered to pay $100 each in fines or serve 30 days in jail. Lawyers from the American Civil Liberties Union provided them with counsel and all of the charges were subsequently dropped on appeal.

Ringgold had produced flag paintings in the years prior to the exhibition in her American People and Black Light series. Earlier this year, on April 23, she gave a lecture at Humboldt University of Berlin and walked the audience through both series. When she got to “The Flag is Bleeding” (1967) she said, “The 60s was rough,” and emphasized her desire to document the times.

“Most artists were not paying attention… They were painting beautiful paintings abstractly…but they were not telling the story of what was going on in America and I thought I wanted to be that person,” Ringgold said. “For that, I paid a terrific price. It was hard. They put me out and tried to keep me out, but I persisted.” Now museums are acquiring her paintings from those series which were once viewed as controversial.