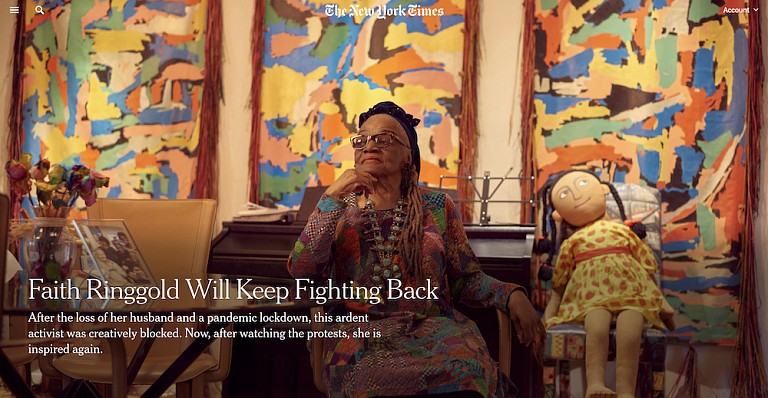 Faith Ringgold Will Keep Fighting Back

ENGLEWOOD, N.J. — Faith Ringgold has seen plenty of shake-ups and strange moments in her 89 well-traveled years. But the provocative Harlem-born artist — who has confronted race relations in this country from every angle, led protests to diversify museums decades ago, and even went to jail for an exhibition she organized — has had no reference point for the pandemic keeping her in lockdown and creatively paralyzed in her home in this leafy suburb for much of the spring.

“I’m trying to make sense of things, bring some light to the situation,” she said a few weeks ago, when the distraction of the news kept her from climbing the stairs to the beautiful and airy studio she had built when she moved from Harlem 30 years ago. “The children aren’t in school, and all over the world, the same situation,” Ms. Ringgold, a former art teacher, mused, while her two grown daughters hovered and MSNBC played.

“I’m just keeping my eyes wide open so I can find a point of view on all this,” she said with a sigh. “I’ve been waiting for the inspiration that can help me inspire others.”

Then, with the death of George Floyd on May 25, she found herself starting to emerge from her haze and to think more clearly, beginning to visualize how to get her thoughts down. She is, after all, the visionary behind the painting of a race riot in the collection of the Museum of Modern Art that, in the last week, has been called a “gateway” to challenging entrenched ways of thinking about social injustice. Her large-scale work “American People Series #20: Die,” from 1967, was inspired by “Guernica,” and hangs now alongside several of Picasso’s iconic paintings.

“I was just trying to read the times, and to me everyone was falling down,” Ms. Ringgold said of the well-dressed black and white people she painted tumbling to the sidewalk. “And if it upsets people that’s because I want them to be upset.”

The painting will still be on view in late summer, when the museum is set to reopen. Meanwhile, on June 18, Ms. Ringgold and Anne Umland, a curator there, will participate in a live Q. and A. session at 8 p.m. on YouTube, part of MoMA’s Virtual Views series. They will discuss “Die” in detail, and much more.

“Certain works become visitor favorites over a long period of time, but it’s rare when a painting instantly becomes one,” said Ann Temkin, MoMA’s chief curator of painting and sculpture, about the large canvas that stunned crowds in the months after the museum reopened last fall.

With her work recently displayed around the world as never before, Ms. Ringgold is having a late-life moment she would not have imagined when she protested at the Whitney 50 years ago, demanding it include more women and people of color. Dorian Bergen, her gallerist at A.C.A. (which has a history of representing political artists), thinks the surge in popularity (and prices) got a jump-start in 2017 with her inclusion in the Tate Museum of London’s “Soul of a Nation: Art in the Age of Black Power.”