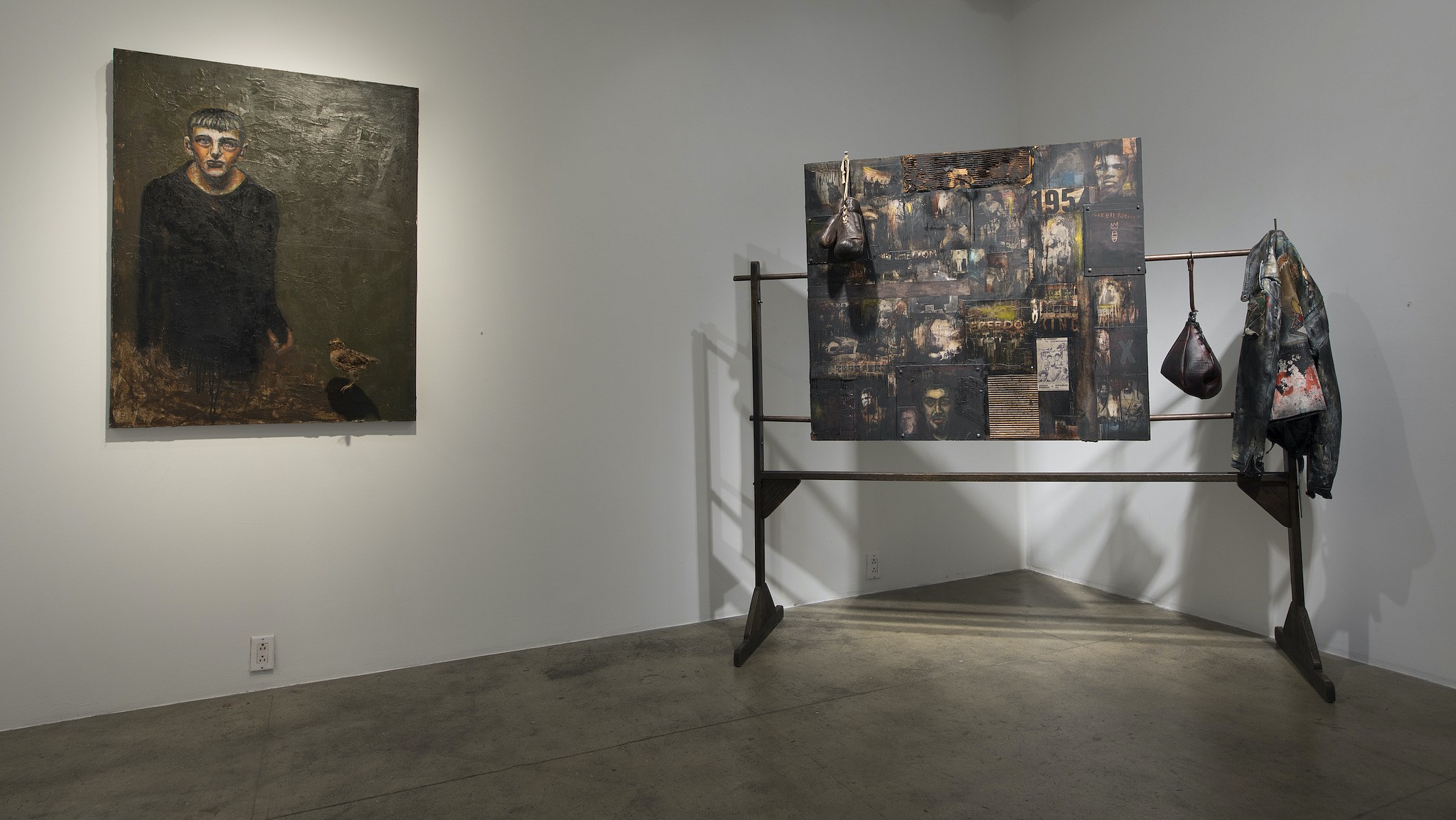 New York, NY – We are pleased to announce a 2-man exhibition featuring artworks by John Mellencamp and Robert Rauschenberg. The exhibition, Binding Wires will open at ACA Galleries on Thursday, October 24, 2019 in New York. This exhibition investigates the dynamic juxtapositions of two bodies of work: Mellencamp’s sculptural assemblages and portraits alongside Rauschenbergs’s mixed media artworks.

As Mary Lynn Kotz writes in her essay,

Born in the 20th century, a generation apart, Robert Rauschenberg and John Mellencamp are driven by the art imperative. They absolutely have to create! Where this need comes from is a mystery; but what feeds their souls embellishes our lives.That swiftly-changing century’s powerful events and its styles offered different circumstances to each: One man going through lean years of the Depression and then war; and the other through the boom of America’s post-war years. As children, both boys started to draw and create and both were inspired—but also discouraged—by their parents. Their inherent creativity deepened, to make art that propelled them away from their childhood homes. As artists, their national reputations were forged in New York, but both grew up far away in the heart of America.

Both artists use collage and assemblage to powerful narrative effect and employ a vast array of found, conventional and nontraditional art making materials. Binding Wires demonstrates how each combines seemingly disparate elements to form a cohesive whole and make potent visual statements. This exhibition is produced in association with Eckert Fine Art and curated by Mikaela Lamarche.

Born and raised in Seymour, Indiana, Mellencamp is an acclaimed singer-songwriter and musician, as well as an accomplished painter and long-time activist. He started painting at an early age, influenced by his mother, also an artist. Mellencamp studied briefly at the Arts Students League in New York, where he discovered the work of Twentieth-Century Modernists. As his musical career flourished, he began to paint earnestly in the 1980s with an early affinity for portraiture influenced by the works of Otto Dix and Max Beckmann. He is a member of the Rock and Roll Hall of Fame, recipient of The Woody Guthrie Award, the John Steinbeck Award, ASCAP Foundation’s Champion Award, the Americana Music Association’s Lifetime Achievement Award, the Founders Award and co-founder of Farm Aid – a nonprofit organization whose mission is to keep family farmers on the land.

Robert Rauschenberg (1925 – 2008) worked in a wide range of subjects, styles, materials, and techniques throughout his career. He has been called a forerunner of nearly every postwar movement since Abstract Expressionism, although he remained independent of any particular affiliation. When he began making art in the late 1940s and early 50s, his belief that “painting relates to both art and life” presented a direct challenge to the prevalent modernist aesthetic.

The celebrated Combines, begun in the mid-1950s, brought real-world images and objects into the realm of abstract painting and broke down the divisions between painting and sculpture. Rauschenberg’s lifelong commitment to collaboration—with performers, printmakers, engineers, writers, artists, and artisans from around the world—is a further manifestation of his expansive artistic philosophy.

Jane Coats Eckert’s roots are in 19th and early 20th Century American artists, on whom she wrote and lectured.  In 1996, she opened Eckert Fine Art in Naples, Florida, where she formed a business relationship and friendship with Robert Rauschenberg, traveling with him to such venues as the Guggenheim, the Bilbao and the Musee d’Art modern et d’Art contemporiain, Nice. She curated shows on Rauschenberg at three museums, mounted numerous exhibitions on his works, including one reuniting him with his BMW art car, in 1992 in an exhibition called Beamers.  She is the past Chair of the Director’s Advisory Council at Mass Moca, served as Secretary of the Fine Art Dealers Association and was named one of the 25 Most Influential People in Litchfield, CT in 2017.