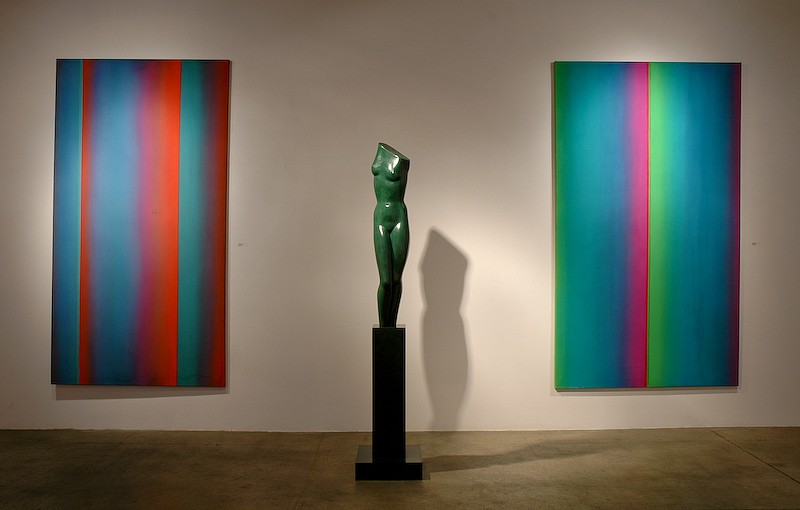 ACA Galleries is pleased to announce Color & Form: The Work of Leon Berkowitz and Anita Huffington.  The exhibition features Berkowitz’s paintings from his Seven Lights series alongside recent bronzes by Huffington.

Born in Philadelphia, Leon Berkowitz (1919–1987) spent much of his career in Washington, DC.  As the co-founder and director of the Workshop Center, as well as an influential teacher and mentor, he emerged as one of the leading figures of the Color Field School. Although deeply expressive in their own right, his abstract paintings – serene, contemplative and calm – contrasted to those of his Abstract Expressionist peers. Comprised of 30 to 60 very thin layers of color, his paintings developed into radiant tapestries of color and light, praised for both their technical skill and spiritual resonance.

Anita Huffington (born in 1934), was originally trained as a dancer under the tutelage of Merce Cunningham and Martha Graham.  She moved to the Ozark Mountains of Arkansas where she has lived and worked ever since.  Her sculptures incorporate both classic and modern influences and return to the most elemental of artistic subjects, the human body.

Huffington is the recipient of the Jimmy Ernst Award in Art from the American Academy of Arts and Letters (1997) as well as the Governor’s Arts Award for an individual artist (2005). Her work has been exhibited throughout the country and is in numerous public collections including Crystal Bridges Museum, AK; The Metropolitan Museum of Art, NY; the Morris Museum of Art, GA and many others.

A 287 page monograph on Huffington with an introduction by Townsend Wolfe (Ruder Finn Press, 2007) is available.