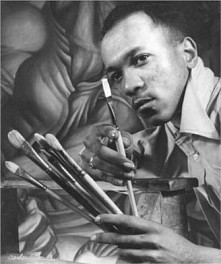 Charles White said that he used his art to “say what I have to say” and “fight what I have to fight.” This bold and purposeful attitude in combination with an exquisite sensitivity for line, shape and tone makes White’s Social Realist art among the most beautiful of that often raw American movement. His drawings, paintings and lithographs of African-American life, its triumphs and struggles, are rendered as visual poetry.

Charles White was born in Chicago just after the First World War. Though America prospered in those post-war years, White’s Southside neighborhood remained a harsh place of impoverished families and neglected streets. Charles White’s boyhood drawings of his neighborhood were early indications of his artistic talent and what would later develop into his social conscience. During his teenage years, Charles White joined The Arts and Crafts Guild; a group of young black artists too poor to attend art school regularly and instead earned enough money to send one of their members to a class each week. That member would in turn report the lesson to the group. At 17, Charles White won a scholarship to study at the Art Institute of Chicago, where he made his first lithograph. He eventually studied at New York’s Art Students League. White’s work at the League won him a place in the WPA’s Federal Art Project in 1940, where he was commissioned as a muralist. His first mural depicted a “History of the American Negro Press.” In 1941, Charles White won a Rosenwald Foundation grant to travel through the American south, rounding out his experience of African-American life and history.

Charles White had been an admirer of Diego Rivera and the other Mexican Muralists since the 1930s, and in the late 1940s, after his wartime service in the army and recuperation from tuberculosis, Charles White and his first wife, Elizabeth Catlett, travelled to Mexico, where he created lithographs at Mexico City’s Taller de Grafica. He remained in Mexico for two years, working with the best of Mexico’s internationally celebrated muralists and printmakers.

With his return to New York, Charles White’s Social Realism in his signature style of muted tones of black and white, sepia, and rich tonalities of reds and browns, had won critical notice in museums and galleries in the United States and abroad. In 1952, the Whitney Museum of American Art purchased Charles White’s ink on cardboard drawing Preacher for its permanent collection.

In 1956, Charles White and his second wife, Frances Barrett, moved to California, settling in the Los Angeles area, where his career continued to flourish. He had several solo exhibitions and was a respected teacher at the Otis Art Institute, where he remained on the faculty from 1965 until his death in 1979.

Charles White holds an honored place in the history of American Social Realism. His work is held in numerous public and private collections in the U.S. and abroad, including the Whitney Museum of American Art, The Metropolitan Museum of Art, the Museum of Modern
Art, the Library of Congress, the Oakland Museum, the Boston Museum of Fine Arts, Howard University, Deutsche Academie der Kunst in Berlin, Warsaw’s Palace of Culture, Moscow’s Pushkin Museum and others. He has been the recipient of several awards in the United States and internationally, and was given an honorary doctorate from Columbia University.