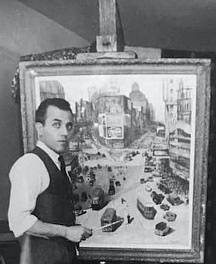 When he was only three years old, Edmund Yaghjian’s Armenian family immigrated to Providence, Rhode Island where they opened a grocery store. As he grew up, the young artist’s talent—and especially his skill in drawing portraits—was encouraged by his local minister who convinced a wealthy parishioner to provide Yaghjian with a scholarship to the prestigious Rhode Island School of Design. Following his 1930 graduation from RISD, Yaghjian enrolled at New York’s Art Students League. There, he studied with leading American painters, including John Sloan and Stuart Davis. These instructors and the influence of the Ashcan school led Yaghjian to abandon portraiture in order to pursue realistic portrayals of the people and places he experienced in the city. His work was recognized as “best of the year” in the League’s 1930 year-end report and, in 1932, he was represented at the Society of Independent Artists Annual Exhibition.

From 1938 to 1942, Yaghjian taught drawing and composition at the Art Students League. This tenure was followed by brief teaching stints at schools in New Hampshire and Connecticut, as well as the University of Missouri. Yaghjian was hired as chair of the University of South Carolina’s Department of Fine Arts in 1945, a post he held until 1966 when he was named the university’s artist in residence. Over the years, he mentored Jasper Johns, Sigmund Abeles, and the mural artist Blue Sky, among others. While his move to the South distanced Yaghjian from the national stage, his contributions to the arts in South Carolina were significant. As in New York, he viewed his hometown as a source of intriguing subject matter, capturing the streets of Columbia in vibrantly colored and increasingly modernist urban landscapes that successfully blend vernacular and abstract elements. Yaghjian’s distinguished career was filled with notable awards and exhibitions at such important museums as the Metropolitan Museum of Art, Whitney Museum of American Art, National Academy of Design, Corcoran Gallery of Art, Butler Institute of Art, and Pennsylvania Academy of the Fine Arts. Credited with being a catalyst in arts awareness in South Carolina, Yaghjian once noted: “I call myself a painter; only time will tell if I am an artist.”