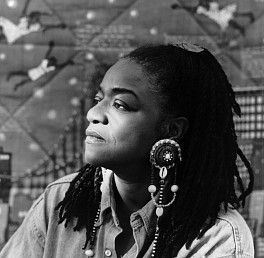 Faith Ringgold, born 1930 in Harlem, New York is a painter, sculptor, teacher, activist and author of numerous award winning children’s books. Ringgold received her B.S. and M.A. degrees in visual art from the City College of New York in 1955 and 1959. Professor Emeritus of Art at the University of California in San Diego, Faith Ringgold has received 23 Honorary Doctor of Fine Arts degrees.

Faith Ringgold is the recipient of more than 80 awards and honors including the John Simon Guggenheim Memorial Foundation Fellowship; two National Endowment for the Arts Awards; The American Academy of Arts and Letters Award and the Medal of Honor for Fine Arts from the National Arts Club.  In 2017 Faith Ringgold was elected as a member into the American Academy of Arts and Sciences in Boston, MA.

Ringgold’s first story quilt Who’s Afraid of Aunt Jemima? was created in 1983 as a way of publishing her unedited words.  The addition of text to Ringgold’s quilted paintings has developed into a unique medium and style all her own.

Tar Beach, Faith Ringgold’s first children’s book, has won over 20 awards including the Caldecott Honor and the Coretta Scott King award for the best-illustrated children’s book of 1991. It was made into an animated short for HBO. The original painted story quilt, Tar Beach, is in the permanent collection of the Solomon R. Guggenheim Museum in New York City.

Faith Ringgold’s artwork is featured on The Metropolitan Museum of Art’s Timeline of Art History, a chronological, geographical and thematic exploration of the most important art from around the world.

In 2019 the Serpentine Gallery in London organized a traveling survey of Faith Ringgold’s work. In conjunction with the exhibition BBC produced a full-length documentary, Faith Ringgold: Tell It Like It Is.

Faith Ringgold is as important to the overall culture of America as she is to the specifics of contemporary American art.  From her earliest breakthroughs during the turbulent decade of the 1960s and continuing into the new millennium, Faith Ringgold maintains her stature as a creative and cultural force.  She is a role model for artists and scholars and continues to influence and inspire others.

Faith Ringgold has been represented worldwide exclusively by ACA Galleries since 1995.